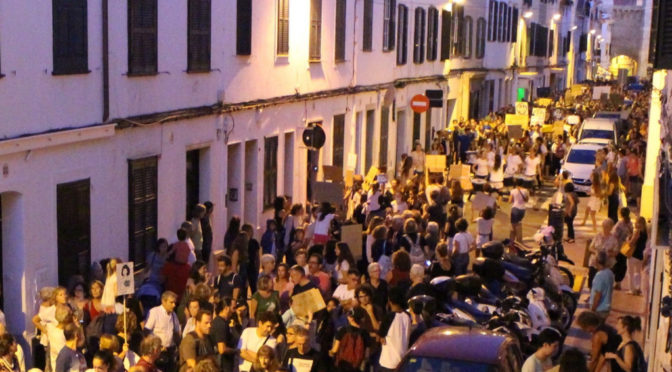 A morning full of activity between the schools, of symbolic stoppages at institutions and businesses, preceded the protest concerning the climate celebrated on Friday 27 September. Already, the previous week had been filled with activities related to the problem of climate change. Workshops, projects, debates, theatre and news had taken place thanks to the selfless help of many people who wanted to add to the initiatives promoted by the Platform of Menorca for the Climate.

Moreover, the action has had an impact on public ministries. During the week, they approved different agreements to put climate change on their agendas as a matter of urgency. On Friday morning, the eight town halls and the Consell Insular signed on Monte Toro for a commitment to a clear future plan for the Island.

At 7 pm, more and more people were congregating at the Explanada square of Mahon. Some of them had come from other towns in extra buses made available by the Department of Transport for the price of 1 euro, or they had shared a vehicle with friends and family.

There were many young faces and many children. Their generation may be the most affected by the drastic changes in climate about which the whole scientific establishment is warning. They came with the support of many other people who feel the need to redirect human activities that are causing the problem.

The rhythmic drumming of Mendó Fem Renou accompanied the cries and numerous posters alluding to the theme of the protest march. The itinerary finished in the courtyard at the back of Sant Francesc monastery, combining the presence of the magnificent historic building that houses the Museum of Menorca with the view of the port of Mahon just in front of the central power station.

That installation, which provides nearly all the electricity consumed on the island, symbolizes old methods that must be changed rapidly. This power station makes electricity from burning fuel and diesel oil, with a very inefficient system (by using one in three parts of what it burns), emitting toxic smoke and constantly discharging chlorinated hot water into the port of Mahon.

The demands agreed by the public in the Plataforma were announced with the reading of the Manifesto where it was required that Menorca should have 80% renewable energies by 2025. It talked of having energy efficient transport; the problems made by the megacruisers; the conditions that would have to be set on new urban expansion; of thinking of ways of conserving the aquifer if we do not want to have to install more energy consuming desalination plants.

More than 80 organizations have endorsed this Manifesto. When added to the public response (some 2,500 people on the march) this shows how it is possible to generate a new awareness in society of the need for essential changes and the will to execute them.

The power of people when organised is very great. In order to cover the expenses of the campaign, people were asked to give a voluntary donation of one euro. In a few minutes, the necessary amount was doubled, leaving a remainder for future joint actions.

Now the work must be continued and sustained. Everyone in his or her own home can make a difference, both by their personal efforts in current organizations and by recruiting new people to the cause, and combining their strengths to accelerate the change. We must ensure that this is not a one-off phenomenon but a permanent commitment. Thinking globally and acting locally. Many thanks.