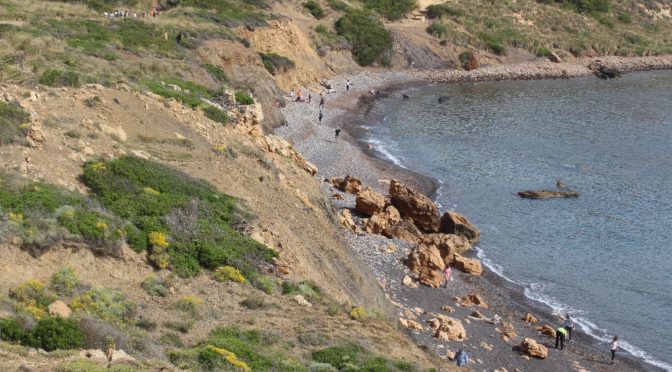 A large volume of needless plastic and a great deal of broken plastic bits. This comes from the cleaning of the shore that GOB organised for 9 June in the area to the west of Cala Tirant. In total, more than 130 kilos of rubbish was collected of which more than 125 kilos were plastics and petroleum derived materials such as expanded polystyrene and ropes. If this is compared with other areas we have cleaned along the shore we see that the quantity collected seems to be less than we find normally, but it has to be borne in mind that a significant amount of this rubbish collection was made from the so called micro plastics, pieces of small plastic. As the area cleaned was a macar (a stony beach), the micro plastics accumulate between stones and are difficult to extricate.

The morning was sunny and the GOB volunteers cleaned nearly two kilometres of beach along the marine reserve to the north of Menorca. The work day was carried out during Sunday morning and was concentrated on cleaning the shore from Es Macar Petit up to Es Macar Gran at Tirant, an area which is prone to piled up waste pushed in from the sea by the tramontana.

At the end of the morning, sorting out of all the collected rubbish was done in groups. What was surprising to see was that one of the most common finds was large plastic bottles (nearly 23 kg). Also, expanded polystyrene which, despite being very light, came to 7 kg, as well as the small pieces of plastic found hidden in the vegetation. The heaviest weight was from the hard plastics which totalled 36 kgs.

Even though society is much more aware and is making efforts to reduce the amount of plastic objects used, we still have much to do. We have to bear in mind that it is estimated that the plastic we find along our coasts is only 15% of what goes into the sea.

We would like to thank the collaboration of the Ministry of Ecological Transition, through its own progamme of the Fundación Biodiversidad. Both the director and one of the technicians of this programme helped on the work day. Also, obviously, a big thank you to the forty volunteers who gave some of their free time to this common cause which is so worrying with the indiscriminate presence of plastic in the natural environment.