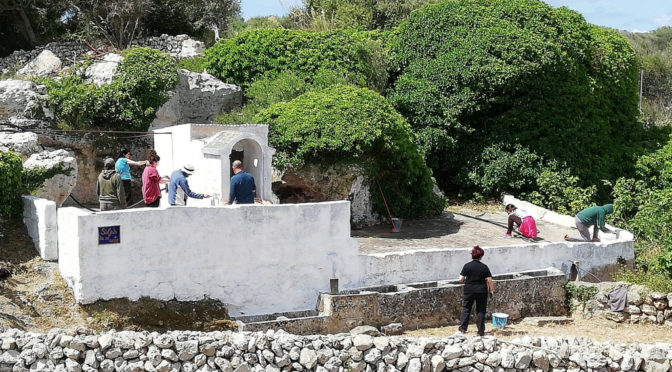 The preservation of Menorca’s cultural, ethnological and natural heritage was the principal reason for the volunteer working day organised by GOB in the Turmadèn des Capità farm near Alaior. This is a farm that has signed up to the Land Stewardship Scheme.

Turmadèn des Capità with its 75 hectares divided up into woods, pastures and cultivated areas, is maintained for agriculture, ecologically raised cattle and apiculture. The products from this farm are mainly Limousine beef and all that comes with the production of fodder such as barley and oats, and sometimes grain from seeds self-planted on the manure.

In 2012 a form of agrotourism was started with restoration work using traditional materials from Menorca such as sandstone and lime to produce its characteristic style. In order to conserve the cultural heritage and maintain this authenticity, the volunteers on the working day whitewashed a threshing floor using limewash paint and water, as well as a cistern for the farm and some other small areas.

This work day is recognised as part of the Land Stewardship Scheme of GOB which aims to make compatible agrarian activity with the preservation of the environment through the agreements for sustainable farming practices. It is a manner of farming that some Menorcan farms have committed themselves for a change in their farming practices and so manage them in a way which respects the environment.

You can find products from the farms signed up to the Land Stewardship Scheme in the GOB shop in the Mercat des Claustre, the GOB office in the Camí des Castell and at some markets such as at the Agromaó on Sunday mornings in Mahon as well as from many of the farms themselves selling direct to the public.

This initiative was made possible with the help of the Mava Foundation and the Consell Insular.