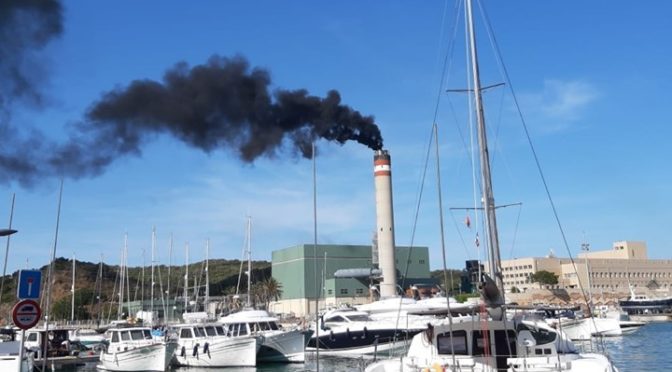 The emissions from the Central Power Station in Mahon are worrying because of their potential adverse effects on the environment and the health of the people. GOB is sending written requests to the Balearic Government for the installation of a meter system to be made available to the public so that anyone can make current readings of the levels of contamination from the power station. You can sign here (https://www.gobmenorca.com/firma-per-un-control-public-de-les-emissions-contaminants-a-menorca).

The emission of CO2, SO2, NOx and particulates emerge each day from the chimneys that burn fuel (three motors) and gasoil (five turbines). It has already been proved that measuring the activities of the power station needs to be improved. Over many years the company has falsified the data of chlorinated water spilled into the Port. In 2016 the power station operated for six months without contamination meters.

The Balearic Government has opened various dossiers of sanctions against these breaches of rules, but always after GOB has found the problems and made formal complaints. So, we realise that it is imperative to extend the possibilities of giving some public controls over the power station. For this reason we are asking for a metering system to be installed in a visible place so that any person of the public is able to see, at any moment, the current level of contamination being emitted by the power station.

The era of producing electricity from combustible fuels ought to be finishing, because we have the technology to produce energy at a local level which is much cleaner and is renewable using sun and wind. This change should be made as a matter of urgency: for environmental reasons, for personal health and for the economic interest of Menorcans. But we know that as long as the technological capacity to store energy does not improve much, we have to keep the central power station as a provider when the supply of renewable energy is insufficient.

Therefore, the challenge is to produce a significant amount of renewable energy so that the contaminating motors would need to work for many fewer hours per day and to establish effective controls so that when the motors do have to be used they cause much less contamination than now.

The public has the right to know at any moment the level of contamination that is being produced. Help us to ask for a meter to be made available for the public to monitor by signing the petition. Please pass it on to your friends. Many thanks.