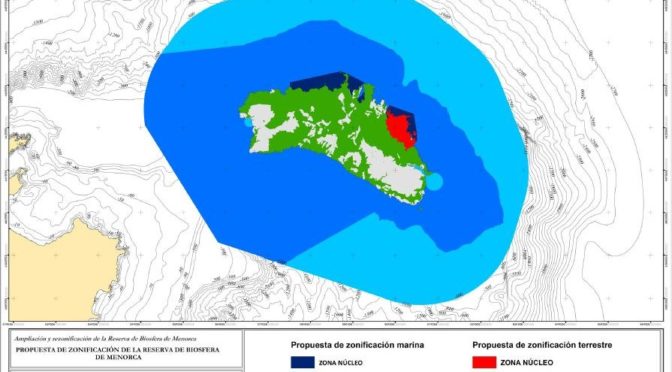 An area of some 20 kilometres of sea around Menorca has become part of the Reserve of the Biosphere, which, until now, included only land. UNESCO approved the addition on 5 June in Paris. This declaration is something which will be very helpful for enabling protection in the future. GOB celebrates the designation and the encouragement it gives to working for the rational conservation of the marine environment.

The declaration of Reserve of the Biosphere does not imply any legal obligation. It is a commitment, which Menorca welcomes, to the international community and it allows previously made protection procedures to become more effective. It is a constituent in facilitating the development of regulations because recognition by UNESCO is evidence of existing values and so it provides the necessary foundation for appropriate measures to be taken.

One aspect to be highlighted by this designation is that the petition made to UNESCO over a year ago by the Consell Insular with the support of the public to designate the sea round Menorca as part of the Reserve of the Biosphere obtained a large number of supporters from social groups on the island related with the sea and, as a result, it will be easier to manage any procedures that will have to be undertaken.

Another point that can be highlighted is that the size of the new Reserve of the Biosphere (more than 70,000 hectares of land giving a total of more than 500,000 hectares in all) obliges formalizing agreements between the state, the Balearic Autonomous Community government and the island government, so they should coordinate their different responsibilities. To organise such a network is not easy, but is absolutely necessary to ensure the management of the Reserve including the marine area.

Conservation of a marine environment is based on very distinctive values but it must also confront important problems of contamination, solid waste and liquids, noise, fishing, climate warming, invasive species and a long list of problems that need to be addressed.

But now we must celebrate. Menorca is writing a very significant page in conservation and it now incorporates one of the duties which remained pending and that is the attention to the marine environment. Congratulations to everyone who has made this possible.