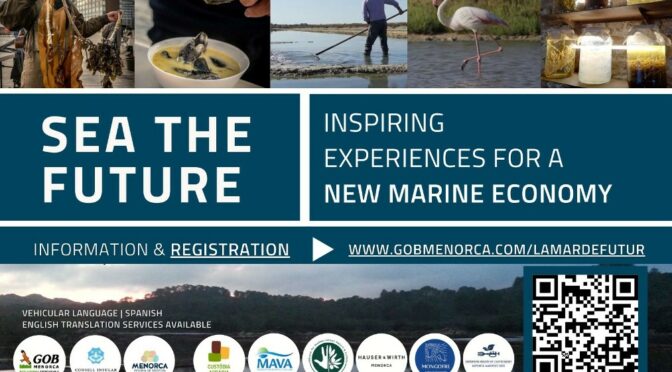 Algies, plankton or gluten free cereals produced by a marine plant are part of the sea garden promoted by Angel Leon, chef of the three star restaurant Aponiente in Cadiz. The biologist who advises him in the search and management of species, Juan Martin, will explain his expertise at the conference taking place on 12 and 13 May, with particularly interesting presentations.

On 12 and 13 May, one day will be at the Lazereto and the other day at the salt flats of Concepcion, and will be entitled “The Sea of the Future. Experiences inspired by a new marine economy”.

The conference will be opened by Fernando Valladares, professor of the CSIC (Spanish National Research Council) and frequent speaker on television, radio, and writer in magazines and social networks. He will deal with proposals for a new economy.

The experience from Havhost will also be given. This is a model of seafood and seaweed farms, which cause regeneration in the marine environment, and are being replicated along the Danish coast. Joachim Hjerl, the founder and executive director will give an explanation by a simultaneous translation service.

Macarena Castro, doctor in biology, will explain new economic initiatives that are being applied or proposed for the artisanal salt flats in the northern Mediterranean, areas of great cultural and natural value, and that are being acquired for the European project MedArtSal.

The association of Salarte will explain its course in the recovery of the nearby salt areas, the numerous economies that are generated and the positive effects that can be gained from natural values.

The project of the complete recovery of the salt flats of la Concepción, at the top of Fornells Bay, will be on exhibition. This is an area of great scenic beauty, but suffers from degradation because it was abandoned. An agreement for land stewardship signed by the owners of the property and GOB has allowed the incorporation of a series of environmental measures that are now being processed.

The conference is organized by the Island Governing Council’s Department of the Reserve of the Biosphere, and GOB with the help of different agencies. This is the opportunity to listen, debate and share ideas on projects for the future of Menorca and the rest of the world.

More information and a registration form can be obtained by clicking here.

Please see the attached posters for advertising the conference and letting other people know about it.