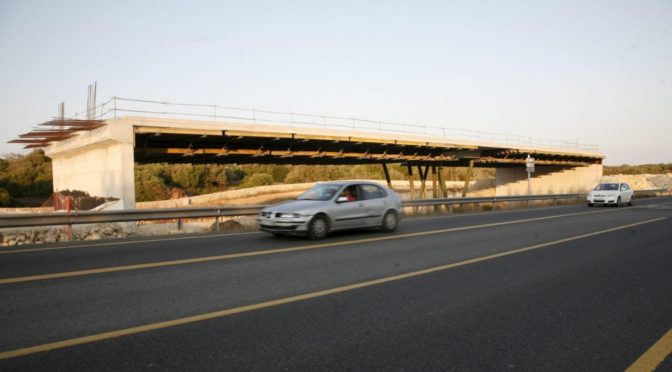 More than two years have passed since the works on the section of the main road between Mahon and Alaior were halted. GOB has expressed its worry that there is still no resolution on the matter of redesigning the enormous roundabouts projected for the cross roads at Rafal Rubí and at l’Argentina.

In the autumn of 2015 the UTE (Temporary Union) of companies that were implementing the works during the last government’s term of office, accepted that they would cancel the contract and a formal agreement was made at the beginning of 2016. The company asked for a further 2.5 million euros for over running but the Consell did not accept this charge. The newly authorised work was expected to finish within five months but only 20% of it has been completed.

From then on, a long process began to see if it would be possible for the countryside to recover from the main impacts that have been made on it. So many people found the work unjustifiable for its inevitable environmental effects that they were motivated to make an intense campaign of protests between 2013 and 2015. Now people focus on the constructions started along the border of Rafal Rubí and l’Argentina and hope that the current governing body, made up of people who clearly showed that they were against them, have the determination to prove their views.

In the case of the entrance to l’Argentina, it has been discovered that the initial structure did not fulfil the technical requirements of drainage which had been imposed by the Balearic Government at the time the work was authorised. In a long process to analyse the best way out of that situation, the Commission of the Environment of the Government resolutely ruled and published in the BOIB (The Official State Gazette of the Balearic Islands) of 9 November 2017, that it opted to demolish the work already done and to make an intersection at ground level.

As for the cross roads at Rafal Rubí, various companies and groups requested that a way should be found to diminish the impact on the countryside around the ancient navetas in that area and it was initially expected to leave 50 metres between them and the road. Now the elevated bridge radically transforms the view of the ancient site and seriously contravenes the recommendations made by UNESCO concerning archaeological heritage.

The claim made by the public (through GOB Menorca’s public protest for the road) recognised the need to improve the entrance to Alaior, which is now nearly finished with an important intersection. And, between Ferreries and Ciutadella, despite the impact that many consider is too great at the entrance to El Pilar, it has been possible to stop the projected double level roundabouts on the way to the Costa Nova in front of Son Sintes and in front of Es Tudons.

But the part between Mahon and Alaior, which triggered the mobilization of the public, awaits decisions for putting Menorca at a level it deserves. Our island has the safest roads and wants to maintain a balance between well intentioned progress and the conservation of its special attraction. For these reasons, coherent decisions are asked to be made.