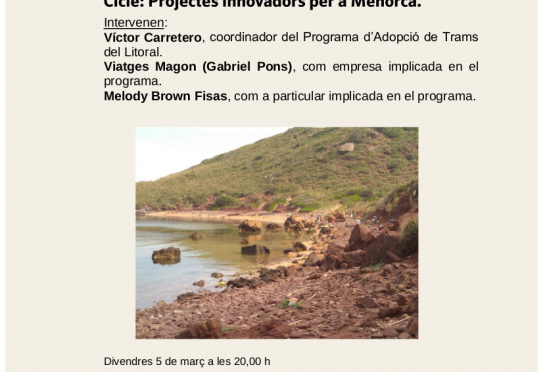 This Friday, 5 March at 20pm, there will be a round table discussion on examples of public involvement for the rescue of the coast of Menorca. The programme of adopting sections of the coast is an example of how people and companies respond to solving significant problems when we channel our worries into one appropriate organization.

Today we are suffering problematic situations all over the world that require the active involvement of society to help resolve them and not just rely on government action. Climate change, rubbish and marine pollution are some examples. The round table on Friday takes as its point of departure the programme launched by GOB of adopting sections of the coastline and has had a huge social response. It is an example of people who really want to contribute actively in resolving these problems and who find correct ways of tackling them. Melody Brown will be present at the table, as a participant of the campaign in a private capacity, Gabriel Pons, of Viatges Magon, representing the involvement of a company and Víctor Carretero, coordinator of the programme.

The event will consist of a brief presentation by the speakers, followed by the involvement of those attending with the idea of having a constructive debate.

The Cycle of Innovatory Projects for Menorca is organized by the Ateneu de Maó and GOB with the collaboration of the Menorca Preservation Fund.