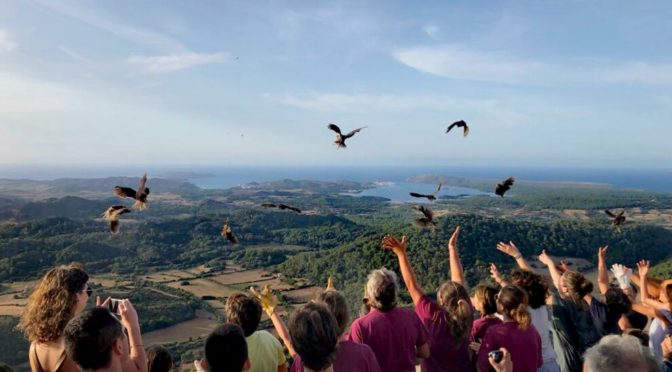 The Wildlife Recuperation Centre of Menorca during 2019 cared for 1,337 animals from 65 different species. More than 1,300 people visited it, including students from 12 different educational centres, groups for family workshops, and general visitors. There is an upward trend for animals requiring assistance, of which 36% have been able to be released back into the wild. Here you can find  the entire record of the year.

Most of the animals that enter recuperation centres arrive due to the effects of human activity: roads, electricity cables, urban aggressiveness, introduction of invasive species…The purpose is to try to reduce the negative consequences from our actions, by collecting and helping the maximum number of animals to recover, and, also, by giving fundamental environmental education. Disseminating what the effects and consequences are on wild animals is a principal objective. The information that we collect also helps to make proposals for what action is needed to reduce the causes of entry.

The main reason for intake is due to chicks of birds breeding in urban areas that have fallen out of their nests or been abandoned. 70% of these young are swifts, house martins or sparrows. Also, birds taken in are wounded owls, kestrels, blackbirds and greenfinches. Nearly 20% of this intake results from collisions, nearly all on roads, the creatures suffering the most are tortoises, hedgehogs, scops owls, falcons and barn owls. Electricity cables cause repeated accidents from collisions or electrocutions. Those mostly affected are usually medium or large sized birds such as cattle egrets, crows, raptors and gulls. Other reasons for casualties that come in are caused by the abandoned remains in the sea of fishing lines, ropes and plastics affecting gulls and especially marine turtles. During 2019, also noted was the number of birds drowned in pools, especially worrying because of the decline in raptors. Some of this can be reduced by putting a ramp or floating platform where animals that have accidentally fallen in are able to climb out.

Exotic invasive species are a problem for animal wild life. To highlight one example is that of water turtles from America some of which have been released and have become established in different wet lands of Menorca. The law now prohibits having these turtles and the Recuperation Centre is where people who own them should be able to take them so as not to release them into the wild. During 2019 we received 85 exotic turtles.

It was insisted that improvements be made to roads during 2019 to reduce animal accidents. It is possible to make tunnels under the roads for the safety of animals. It is also possible to adapt cattle grids so no animals become trapped. These proposals were part of the project we presented in the participatory budgets to the Consell Insular and which are now being carried out. Another initiative that was reinforced during 2019, in collaboration with SOM (Societat Ornitològica de Menorca) and SEO (Sociedad Española de Ornitología) was the request to the Town Councils (ayuntamientos) and the Island Government (Consell Insular) to put into effect different types of methods for protecting and enhancing urban biodiversity and especially for nesting birds.

The Recuperation Centre for Wild Animals of Menorca is able to carry out its work thanks to the help of many people and organisations. The management of GOB is thanks to an agreement of collaboration with the Consortium of Fauna of the Balearic Islands (COFIB). Essential, also, is the help of the Lithica Foundation, which gives us the space in the quarry for the Centre; the veterinary clinic of Jaume Pons; the Consell Insular of Menorca; the Town Councils of Ciutadella, Mahon, Es Mercadal, Ferreries, Sant Lluis and Es Castell. We are also grateful for the help of local police and the Forest Wardens and of SEPRONA (The Guardia Civil  Nature Protection Service). The people who have contributed to the finances through sponsoring an animal at https://aporta.gobmenorca.com/ deserve a special thank you. In addition we would like to thank all those who brought in wounded animals for care. And, of course, special thanks to all the volunteers who are a key element of the work and without whom we could not function.

You can download the full report by clicking here.