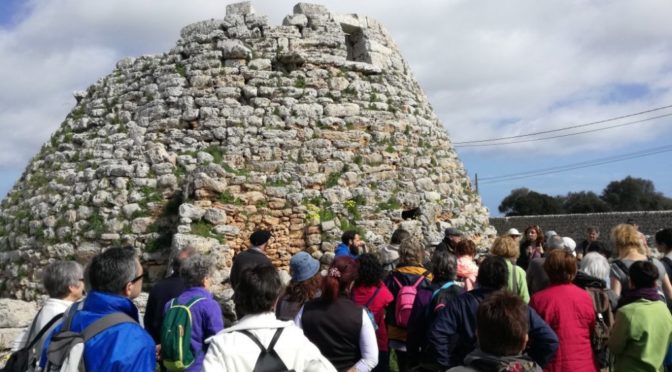 More than a hundred people took part on an excursion celebrating the Day of the Balears, on 1 March. This was organised by the Consell Insular as part of the festivities in conjunction with GOB.

The old roads and paths, which used to be for travel before modern roads, were taken by the walkers who passed between points of recent historical interest. Bricked up doorways, dry stone walls rising to a height of two metres, small farm houses, the openings to cisterns, and a large number of other ethnological features were noted.

The Camí Vell de Llucmaçanes and the Camí Vell de Sant Climent foot paths were the main ones taken on the itinerary. The countryside was luxurious and the first orchids of the spring were flowering along the edges of the pathways.

Explanatory talks were given at the Torelló site by two archaeologists, Sílvia Villalonga and Cristina Bravo, who divided the walkers into two groups, each shown the large Talayot and a house on a nearby site.

Torelló must have been one of the largest towns on the eastern side of the island, but the land has suffered from so many different uses it has left very little evidence. The large talayot would have had living quarters in the top part covered with stone slabs, which were used, also, in Roman times.

Having learnt some new data on the history of the Island, the walkers returned to the start point of the outing, having enjoyed a beautiful spring morning.