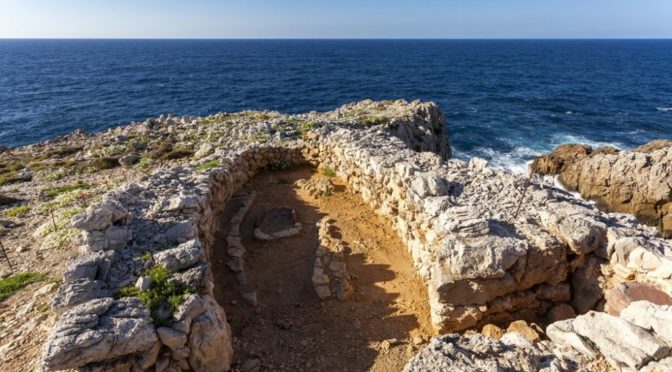 The Consell Insular and GOB are organising an excursion on foot on Sunday 26 March. It will go along rural paths and the coast finishing at the walled village of Cala Morell, which has recently been excavated.

Places are limited. So you must subscribe below, and we will close the list when the maximum number of participants has been reached.

You can put your name down here

The excursion will pass along the flat land to the west of Ciutadella with marine and rocky parts, where there was to be a project for a solar park which has failed to materialise. The visit to the prehistoric remains will have the explanations of an archaeologist.

The walk is easy. You will have a bus service to return (3€). It is expected to end at 13.30. You will be able to see the complete details for the time and place of meeting when you send in your name.

It is recommended that you contact friends who also put down their names so as to share a car.

We take this opportunity to remind you that, one day before, there will be a talk which will be on the introduction of new species given by Pere Fraga and Damià Ramis. It will be on Friday 24th at 20 hours, in the Sala de Cultura of Ciutadella. The cycle Are we Talaiotic? Living in Menorca before and now is a programme organised jointly by the Cultural Department of the Consell Insular with GOB.