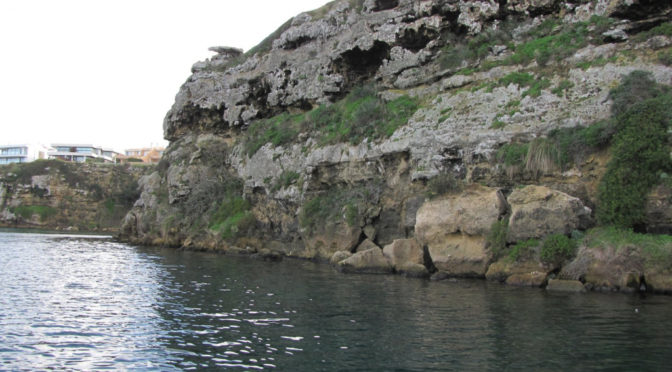 GOB is asking the Port Authority to stop altering the natural areas of the Port of Mahon. The Cala Corb project includes a geotechnical study of the solidity of the cliff to support a cantilevered wooden walkway. Some days ago, GOB condemned the changes happening to works that were being carried out for the south sidewalk of Cala Corb, in Es Castell, one of the areas in the Port of Mahon with a natural rock cliff. Since then the works have been stopped.

The project approved previously was for a working dock as a continuation of the Moll d’en Pons, where it is not very deep, and a cantilevered wooden walk-way linking it to Cala Corb, where the depth varies from between 10 to 13 metres. However, unauthorised and large quantities of building materials were being thrown into the Cala Corb area.

GOB asked to consult the project plans and found that they included a report on the geological solidity of the area where the supports were to be fixed. The results of this work show that the cliff far exceeded the necessary requirements for fixing the walk-way. This report seriously questions the need for a dock.

The dumping of waste that has already taken place is literally burying one of the few stretches of natural underwater rock that are left in the Port, an area that still gives the most important shelter of the island for young fish and that provides other natural values despite the various uses of the Port. In GOB’s opinion, there is no justification to lose these spaces for constructing a dock where more embarkations can be made during the season.

The Port of Mahon requires a rethink of its purpose, because it seems that currently it is considered only for its nautical use and for cargo and cruise ships. The Port is very large and provides for many other functions; activities such as sailing, kayaking, swimming in sheltered areas and other similar initiatives. All this should be possible with basic planning.

Its environmental role should be an interest of a public organisation such as the Port Authority. Underwater rocks below the walkway to the south of the port and the coves and pavements to the north that still retain their natural appearance should be areas preserved from physical and chemical changes. The port is sufficiently large to be able to carry out human activities without dramatically changing its character.

GOB will ask for a study of the marine values of the area affected, the removal of materials thrown in without authorisation, and the abandoning of ideas that continue to alter areas that keep their natural image. These areas are beneficial to the port just as much as the conservation of areas of the island benefit Menorca.