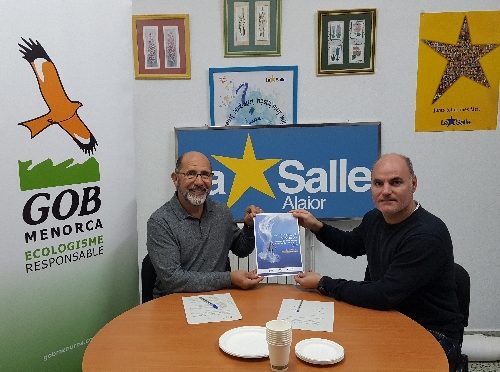 The Salle d’Alaior school has signed an agreement with GOB promising not to use disposable plastic crockery and cutlery for its fiestas and celebrations. Currently, 8.7 million tons of plastics end up on our shores. This number is only 3% of the plastic waste we generate in the world each year and it is rising. Far from being biodegradable, this waste breaks down into smaller pieces entering the food chain through fish, other sea food and salt which we then consume. The latest study talks of 5 grams of plastic per person, the equivalent of a credit card, each week.

To help put a break on this uncontrollable generating of plastic waste, GOB launched a campaign to try to eliminate the maximum amount of one use crockery and cutlery in fiestas celebrated by education centres on the island. When we talk about fiestas, the most sustainable option is reusable crockery and cutlery but if recollecting them is not possible then there are items made out of biodegradable materials.

We also encourage those schools that have already eliminated one use plastic cutlery and crockery to stick to the initiative so as to make a strong common front to deal with this worldwide problem. Eight schools have added to the promise to eliminate solo use plastics by 2020. You can see all 44 entities that signed the agreement by clicking here.