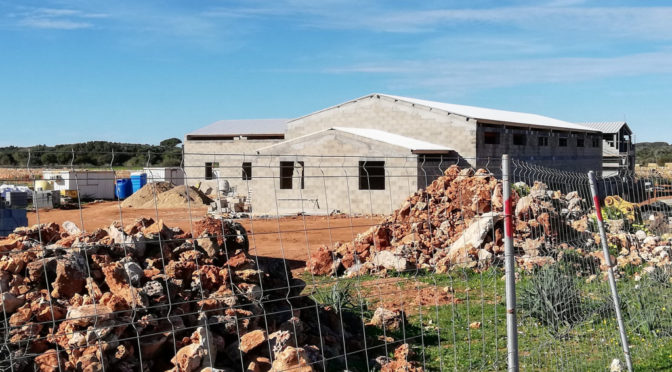 Various illegal construction works have resulted in considerable fines to the managers of an agrotourism that presented a project with a theoretical environmental commitment, now realised to be a hoax. The case shows the necessity of clear regulation with effective surveillance.

The agrotourism of Torre Vella, in the municipality of Alaior, presented a project that, amongst other problems, expended a lot of water from the aquifer for tourist services. In an effort to reduce this impact, the project incorporated various below ground level water tanks that could collect water, purified on the spot, which would be used for watering the gardens.

This method was appreciated by the Commission for the Environment, who approved the project on condition that other conservation measures were incorporated. However, once the first inspections had been passed, the below ground level water tanks were converted into swimming pools. GOB detected the possible fraud that the Consortium of Urban Discipline has now confirmed along with a list of other illegalities.

Seven undeclared swimming pools, the cementing of more than 2,000 square metres of roads on what should be farmland, various unforeseen concrete areas and other smaller infringements have been found in inspections carried out.

The resolution of the Consortium has levelled a fine of 486,844 euros for each of those responsible. These are the promoter, the builder and the architectural director of the works.

The project was surrounded with controversy during its processing because the promoters took all the existing farm buildings to be converted for tourists and then made a public complaint when they wanted to construct new buildings for agricultural use and this process was then passed. These new agricultural buildings are next to the Camí de Cavalls and have been left half built for the last year (see the photograph).

Now a deadline has been set so that those responsible for the fines can seek the possibility of legalising the works. In GOB’s opinion, this will be complicated because the works not only have no licence, but they are contrary to the environmental conditions imposed by their authorisation. This would become a double breach.

This case exemplifies some of the questions put forward by GOB relating to the new wording of the PTI (Island Territory Plan), such as the necessity to regulate swimming pools for tourist accommodation, the consumption of water from the aquifer for new tourist places and the necessity to have effective surveillance, especially for the large projects that are taking place on the Island.