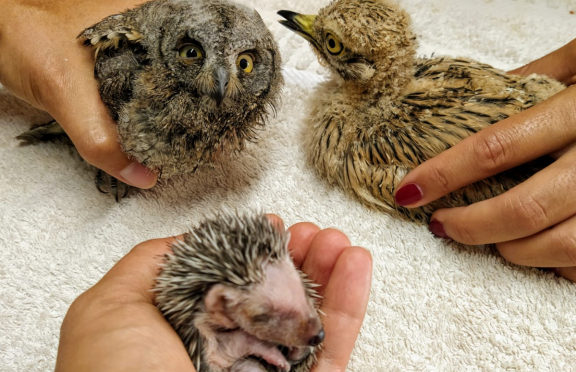 While 2020 was an atypical and critical year for humanity due to the health crisis of COVID 19, nature continued along its way. So much so that the Centre for Recuperation of Wild Animals of Menorca closed the year 2020 with the following figures of 1,154 animals 78 different species given attention, and that was 13 more than admitted during 2019. Thanks to constant public help, the involvement of various volunteers and the work done by the Centre’s personnel, this year the percentage of animal recovery and release has increased by about 38.8%. The annual report is attached at the end of this article.

Within the possibilities allowed by the restrictive protocol of the pandemic, 1,040 people visited the facilities during the summer months, to which should be added the 120 students from three schools that visited the Recuperation Centre during the school year. There were also two open days; the first aimed at the public, the second only for those who have sponsored animals.

Admission as a result of collisions is the second most common cause. Identifiable collisions were most frequently with vehicles, second were those with windows and electricity wires. Other reasons for admission were from lack of nutrition, attacks from predators and entry into buildings. Of particular note was the attachment of cords and plastics to 12 marine turtles.

As for the exotic species, up to 40 specimens of American tortoises, abandoned by private owners, have been retrieved. They become grave problems to the Menorcan ecosystems and have to be treated as an invasive species as they displace the local fauna.

2020 was a year notable for marine turtles. For the first time, there was evidence of nesting by two marine turtles in Menorca. Some of the hatchlings were taken to a specialist centre and will be released in Menorca after their first year of life with the object to increase significantly the probability of survival.

The Centre for Recuperation of Wild Animals in Menorca is possible with thanks to many different forms of help. The management by GOB is thanks to the collaboration of the Consortium of Wildlife Recuperation Centres of the Balearics (COFIB); the Lithica Foundation granting the space for the facilities; the help of the veterinary clinic of Jaume Pons; the Consell Insular of Menorca and the Town Councils of Ciutadella, Mahon, Es Mercadal, Ferreries, Sant Lluís and Es Castell.

The active participation of the Environmental Agencies of SEPRONA and the local police is much appreciated. A special thanks is given to the people who have contributed financially by sponsorship of those animals that require long term attention or live in the Centre because they are incurable. Also, thanks to all the people who have brought in injured animals after accidents. And, of course, thanks to the whole team of volunteers that is a key element for its existence and without whom we could not function.

The main purposes of the Recuperation Centres are to help minimize unnatural effects on wild life and for the maximum number of animals to recover. It is also for learning through environmental education and dissemination on the main threats that directly or indirectly affect wild animals.