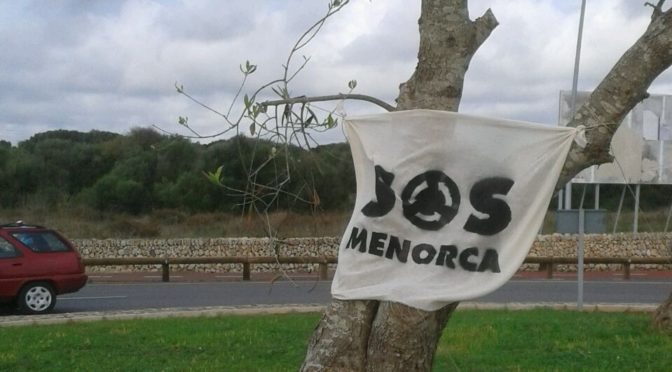 During these past few days there have been some articles in the local paper (by Aurora Herraiz, Beatriz Estopiñán, Alfredo Benosa) questioning what is happening to the Carretera General (the main road between Ciutadella and Mahon) now that two new projects have been approved.

The writers are people closely connected with the previous political government and who continue to show they do not understand that there are people who participate in politics but their views are independent of political colour. They show that they still do not understand what has happened during these past years and continue with their same assumptions.

They think that the opinions of those against the project for mega roundabouts on two levels along the main road of Menorca came as a result of four extremists who aimed to cause opposition to the last government. They did not know, or did not want to see, that there was, in fact, a large number of important people with varying ideologies who protested against this project.

Since the change of the Island Government, some things have happened in relation to the main road. Roadworks have stopped between Mahon and Alaior. They were delayed because, as is well known, the companies awarded with the work asked for a very high increase in the costs which was not given. Knowing that these works had been stopped, despite the destruction already caused, made many people smile.

The campaign for the main road was far from superficial. Many hours were dedicated in analysing these projects and many public discussions ensued in as many public meetings as possible. So we continued working and therefore knew that the public works which were to be redone would be the subject of further complex legal scrutiny. We have explained all this in various articles and public talks. The bidding for works to the entrance to Alaior was kept separate.

A double level roundabout at Alaior is to be made. However, it will be smaller than was first intended. During the public campaign, it was always maintained, and written about, that this was the only point where it was deemed acceptable to have this type of roundabout because it provides a connection to the third largest population nucleus on the island, to a road which goes round the town as well as to the industrial area and where lorries enter and leave.

Of course, there was very little point in making the large double level roundabouts as projected, to areas of small population, or to unused entrances, or (as at Biniai) in the middle of nowhere, all of which provoked the conflict.

Another smile was drawn across the faces of many when it was learnt that the new bidding for the section of the road between Ferreries and Ciutadella was not to include two large double level roundabouts initially projected to be built in front of the quarry and in front of the Naveta des Tudons.

We have not stopped studying the proposals for the project, following the changes, nor giving talks to the public for debate. The roads of Menorca are the safest in the Balearics, known from statistics made over the years. We continue working with the happiness of seeing, despite the difficulties, that this Island is entering a new episode in favour of sustainability.