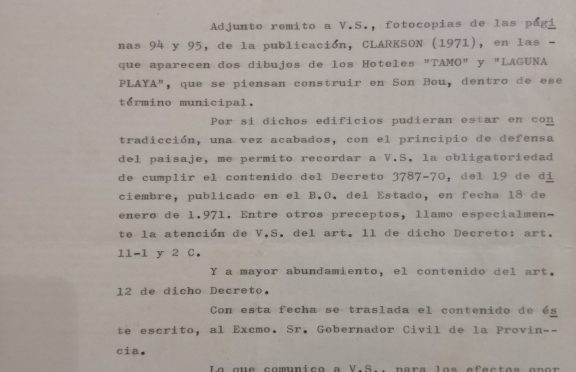 The two large towers built in the 1970s on the front line of the beach of Son Bou continue to give surprises. Some official documents from 1971 required that the two towers be reduced in height but have disappeared from all the public institutions. In any case, the hotels have been constructed over some basements although, when the licence was given, it was specifically stated there should be no building over them. This puts into question the legality of the whole building.

The current owner of the buildings, the Sol Meliá chain, was intending to consolidate the two hotels to last a few more decades. GOB considers it a mistake not to make use of the obsolescence of these buildings and plan for a project which has less deleterious visual impact and is more environmentally accceptable.

When these two hotels were constructed there were no rational planning principles for building in Menorca even though it was evident from some of the documents found by GOB, when consulting old records, that the dictatorship was still in force at that time.

Let us remember that the architect who was representing the town council was also acting as the attorney for the owners of the land and whose report said that the hotels were an example of integration with the countryside.

Following some initial indications of possible failures of compliance with urban planning parameters, a new file was found a few months ago in a book, separate from the case file, which guaranteed – as was said and published repeatedly – the legality of the hotels. GOB asked to see this book of events and verified that a new licence was found dated 30 November 1971 which gave the conditions of strict compliance with the briefs sent by the General Director of Tourist Companies and Activities, answerable to the Ministry of Tourism.

GOB has asked, on repeated occasions, to be able to see the contents of these two documents. The Town Council has taken months to reply but a few days ago a communication was received which said that the the Ministry of Tourism briefs had not been found by the Town Council, nor by the Balearic Government, nor by the current Ministry.

This is not a minor matter. The old file had already been located by the Provincial Delegate of the Ministry of Tourism who had been to the Town Council informing them that he had seen the project for the hotels and considered that it would be in contradiction with the principles of countryside protection. For these reasons, he reminded them of the obligation to comply with the requirements of the Decree 3787 of 1970.

This Decree said precisely that tourist projects should be submitted for the approval of the General Director of Tourist Companies and Activities. Therefore, it was mandatory to comply with what was said in the documents cited in the licence of 1971. One was dated 31 July 1971 and the other 13 November 1971.

From the complementary documentation of the certificate issued by the architect, stamped with the date of 12 July 1971, it is known that one of the Ministry files demanded that the height of the buildings be reduced. The response of the project was to build a lower ground floor, a ground floor, a first floor and nine more floors. Not having been able to see the Ministry files, we do not know if this option complied with the imposed requirements.

But, in the architect’s certificate, it also says that they gave up the idea of building basements, because they detected that the water level was very close to the surface. In reality, the current hotels do have basements, in which case these buildings would not have been authorised.

So, it seems, there are new questions on these two constructions. If the basements are not legal, in what way is any building above them permissible? What more do the two files of the Ministry of Tourism say which all the institutions claim have been lost?