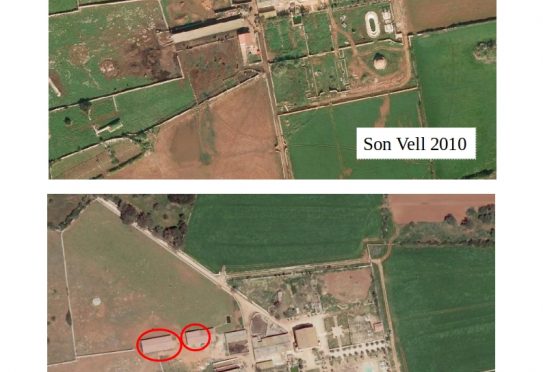 The Menorcan press has published recently that the place known as Son Vell, in Ciutadella, has received a licence to make available 109 agrotuourism beds. In GOB’s opinion this is a clear example that demonstrates the necessity to regulate tourist accommodation in the countryside sensibly.

Agrotourism can give the oportunity of complementing agricultural income, or help recuperate heritage places of architectural interest. But, in the case of Son Vell, these principles are seriously lost and it seems to have become, simply, a speculative urban operation.

The project forecasted was to make 56 bedrooms available for the purposes of tourism. 15 bedrooms were to be in the old house, which would seem logical within the concept of agrotourism as an activity complementary to agriculture.

But the 41 remaining bedrooms are situated in the stables. The stables were built recently and are modern in style.

Four of these stables were contructed in 2011 intended for agricultural activities (see the attached illustration), and the other large module was built in the nineties. They have neither arquitectural importance nor have they had time to become obsolete for the reasons they were built. The promoter is a limited company dedicated to real estate.

But people who are concerned about the reasonable uses for Menorcan land, are angy to see that new buildings are getting permissions for supposed agricultural use, but that within four days are converted for other purposes.

It is a worrying subject especially because Menorca has quite a few projects being processed which are precisely dedicating all the existing buildings for tourism and constructing new ones supposedly for agricultural purposes. As seen previously, one can ask how much time it will take to make them available for other uses. It is evident that much more solid guarantees must be established than exist now.

GOB has asked to be able to consult the dossier on the case in order to know if the new stables have been made with public agricultural financial help and to analyse if the legal requirements have been met stating they are for an activity to complement agriculture.

Cases such as this show the necessity to incorporate some criteria that oblige a minimum antiquity of the buildings which are wanted to turn into tourist accommodation, and to have some distinctive architectural characteristics that define the maximum number of bedrooms in each establishement and which always reserve an imprtant percentage of existing buildings for agricultural use.

If this does not happen, it will make it easier for urban building operations to continue in the countryside disguised as agrotourism. Menorca must not commit this error.