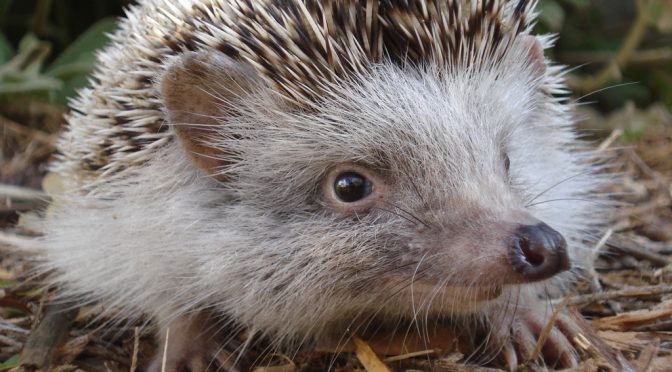 Hedgehogs are an important part of the ecosystem of Menorca. They are well known animals for their characteristic covering of needles. These spines are nothing more than hairs filled with keratin which stiffens them. The hedgehogs in Menorca are the smallest found in Europe. It is usually called the African hedgehog because it is native to north Africa. From there it spread along the coast of the Iberian Peninsula, Malta, the Canaries and all the Balearic Islands. The oldest hedgehog remains found in Menorca date from the 13th century (Morales and Rofes, 2008), from which it is surmised that it was the Almohads who introduced them, and it is documented that the hedgehog was appreciated both for food and for being used for medical purposes.

Our hedgehog is different from other European species because it is a little smaller, it does not have spines on its front and is a different design. It has a groove on its head between the spines. They are lighter in colour and have much larger ears. The spines are pale coloured each with a dark ring near the middle. It is estimated that there are between five and seven thousand hedgehogs in the Balearics. This species is adapted to a warmer climate. The spines are an effective control against predators. When it feels threatened it curls up and raises its prickles making a spiny ball which puts off any attack. Having such a reliable system of defence it does not have any strategies for fleeing and does not run very much.

Hedgehogs are nocturnal animals. They are active between sunset and dawn, sleeping during the day. They are guided mainly by smell and sound. They have poor sight. They do not stop sniffing around with their sharp snouts looking for all the bugs they like eating: insects, slugs, worms, snails, grubs … The smaller ones also eat other things such as animal remains, fruits, seeds … They have some very pointed teeth adapted for catching their prey. They can eat up to 200 grams in a night. They sometimes hibernate but only for a short while if it is very cold. When this happens, their metabolism slows down lowering their body temperature to only 9˚ C. Babies are born from June to October. The gestation period is only 28 days and there can be three in the litter. It is possible for the same female to have two litters in a season. Newborns have pink skin without hair but with some soft spines which they lose at the end of one month in exchange for their typical adult spines. Newborns open their eyes after two weeks. To begin with they only suckle their mother for food, but little by little they incorporate other foods. They normally live for four to seven years, though some are known to live up to fourteen years.

Hedgehogs are very common in Menorca. They live in open spaces, under bushes, or among abandoned crops. They have few natural enemies especially once they are adults. Young ones can be prey to pine martens or owls. But where most hedgehogs die is on roads from accidents. This is one of the species with the greatest losses caused this way. For some years it has been estimated that some 2000 hedgehogs are killed annually on roads (Roig & al., 2004). It is possible to take measures to reduce these deaths when roads are designed. Responsible driving, at moderate speeds, can also help to reduce accidents. Hedgehogs are very affected by parasites, as much external as internal. Their barbs are very effective against large predators.

Hedgehogs are part of our ancestral culture. Until well into the twentieth century they were hunted and eaten. Their meat was much enjoyed above all in a subsistence economy. They were caught at night with hedgehog hunting dogs trained to find the animals. It was also common to have hedgehogs in vegetable and back gardens for controlled hedgehog breeding. Nowadays it is a protected species so that they cannot be hunted nor kept in captivity, even though it is fairly abundant in the Balearics. At a European level it is protected by the Habitats Directive, that is specified in Spain by the RD 139/2011. Some species are bred as pets, but it is an inadvisable practice, since they do not stop being wild animals even though emotional ties with humans can be formed.

Distribution: originates from north Africa from Morocco to Libya. Introduced to the Mediterranean coast of the Iberian Peninsula

Reproduction: Placenta, 1-2 times per season with 1-4 young, from June to October

State of conservation: Very good in Menorca. Qualified of “small worry” in consideration of this species.

Legal Protection: Protected at a European Level by the Habitats Directive. At state level by RD 139/2011

(Article published by Montse Bau and Tòfol Mascaró, biologists of GOB Menorca, in the section Xoc of the Diari Menorca, 10/10/2018)