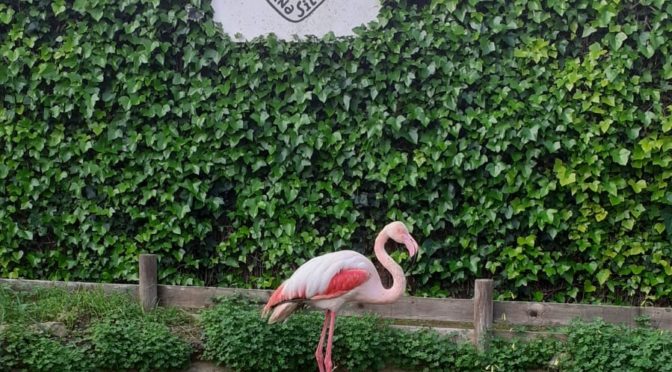 The Centre for the Recuperation of Wild Animals recently set free an adult male flamingo that had arrived in the island exhausted after the Filomena storm. The recuperation of this bird was particularly complicated but eventually it was possible to liberate it in the Mongofra salt beds, where a group of about forty of these animals are wintering.

It was on 10 January when the flamingo was seen floating in the port of Ciutadella. It had probably fallen into the water because of the storm. It was very weak and was unable to stand. Advice was given by Centres of Recuperation with greater experience of this species, and, little by little, the flamingo gained strength. It was fed on artemia, a live crustacean fish food that these birds usually consume giving the feathers their red colour. A harness was adapted so that its legs could regain their strength, like those used in hospitals for walkers. Finally, when it was seen to have gained a good physical state, it was liberated amongst the group of flamingos wintering in the Mongofra salt beds.

There are half a dozen varieties of flamenco species in the world. The species we find in the Mediterranean also live in India and Africa, in environments with shallow and saline shores. The population of the eastern Mediterranean generally breeds in Fuente de Piedra (Málaga) and the Camargue, and more occasionally in the Ebro Delta, Doñana, La Mancha, an area in Alicante and in Italy. Outside the breeding season, they disperse to the Mediterranean coast and the Atlantic coast of Africa. In the Balearic Islands they are commonly found for a while in winter especially in the salt beds of Pitiuses Islands and Mallorca. It is also common to see them in Menorca but in much smaller groups. Mongofra Nou, a farm that has an agreement with GOB´s Land Stewardship Scheme, is where the largest groups habitually winter.

It is not usual for flamingos to be admitted to the Centre for Recuperation of Wild Animals in Menorca, though it is not uncommon for young birds at the end of the summer, when they arrive in Menorca very tired from their first flights after leaving their breeding areas. However, the admission of adults, as in this case, is exceptional.

The Centre for the Recuperation of Wild Animals operates with an agreement by GOB and COFIB, with the help of the Consell Insular of Menorca and the Town Councils of Ciutadella, Mahon, Es Mercadal, Ferreries, Sant Lluís and Es Castell. The help of volunteers is essential for maintaining its activity as well as the support of all those who sponsor an animal. If you would like to become a sponsor please visit aporta.gobmenorca.com