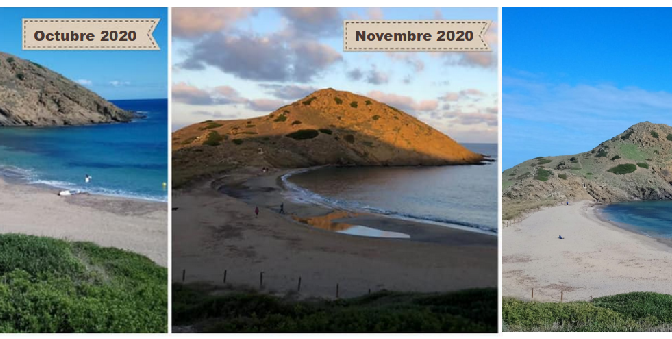 The groups that have adopted lengths of the coast have already completed 100 events along the shores of Menorca. New groups are continuing to join the initiative that now has more than 1,600 people who decided to have a special relationship with a stretch of Menorcan shoreline.

Last Thursday, forty people connected on line to take part in training aimed at new groups that have recently joined the programme for adopting stretches of the coastline. The internet users heard a small informative talk and were then able to take part with comments, ask questions and share experiences.

There have already been information talks given to more than 200 representatives of the groups, where it was explained in detail how the programme originated, and what is needed to participate and how it goes far beyond beach cleaning. It seeks to involve Menorcans with the marine environment through the observation of natural values and any action that needs to be taken over problems.

So far, people of all ages and conditions have joined. They include groups of friends, families with children of various ages, retired people and groups formed by people unknown to each other. We even find some groups made up of people who do not live in Menorca but have promised to come here at least four time a year to carry out the activities. Residents’ associations, organisations and companies have also wanted to join the initiative of adopting a section of the coastline.

When talking of numbers, the programme has more than 1,600 participants divided into 98 groups that have adopted 109 beaches, coves, sections including even little islands. It is calculated that 48,855 metres of our island have been adopted.

Even though the health crisis has made the task more difficult, more than 100 activities have taken place since the start of the programme in October 2020. The participants were able to examine different aspects of the beaches such as their dynamics – that can change from one week to another – the presence of invasive species and the grave problem of microplastics that cover the coastline and that are, in many cases, impossible to remove.

Here is a map showing the adopted zones.

For more information if you would like to adopt a beach, a cove or a stretch of the coastline, you can complete our contact form and we will get back to you as soon as possible.