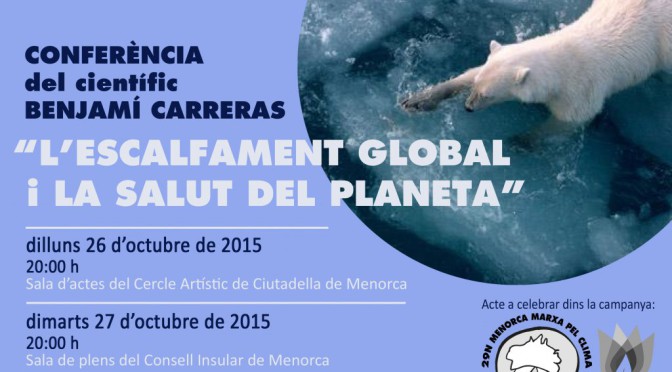 Global Warming and the Health of the Planet

Today is the start of the campaign “29th November, A Menorca March about Climate Change. To coincide with Paris”. It begins with a talk by Benjamin Carreras “Global Warming and the Health of the Planet” at 8 pm in the “Circulo Artistico” of Ciutadella. Tomorrow, Tuesday 27th Benjamin Carreras will repeat the talk in the Plenary Hall of the Consell Insular in Mahόn also at 8 pm.

Until now, the world governments have not been capable of reaching agreements to take measures to stop climate change. At the beginning of December a new summit meeting will take place in Paris where it is hoped that the different states will adopt correct measures. To prove that the great problem of climate change concerns many people an international demonstration has been organized to which different companies and associations have joined for the campaign “29N, A Menorca March about Climate Change. To coincide with Paris”

The action will culminate on 29 November with a protest walk starting in Ciutadella. Before that, different activities have been organised (talks, film forums, courses…) to explain the real extent of climate change, what it causes and our ability as society to stop it. We encourage everyone to take advantage of the occasion to inform themselves of this immense problem, its global, economic, social and environmental effects.

It is also possible to participate in the campaign at an international level by signing a petition to the governments of the world to work seriously on this problem, for example in http://act.350.org/sign/paris

Today and tomorrow we have the opportunity to hear Benjami Carreras, a top scientist, explain what can happen with global change, the effect on the climate in particular, and on the planet in general if we do not act correctly and quickly.