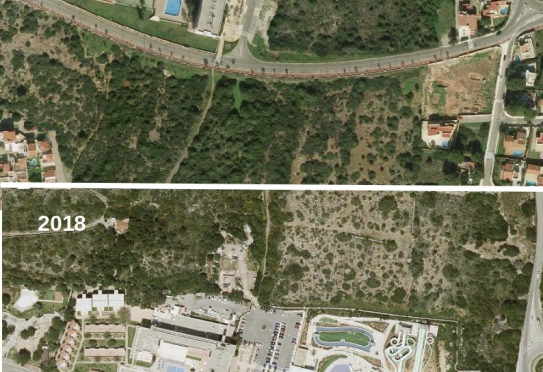 The second judicial ruling on the aqua park at Biniancolla reaffirms that the park could not be constructed in a protected area, that it was not in the general public interest and was of only limited seasonal appeal.

The construction of an outdoor aqua park in Sant Lluís was one of the important regional controversies in 2013 and 2014 in Menorca. The impression of a la carte urbanisation and of the treatment of favours fed the debate. The combination of the Balearic Government presided over by Mr Bauzá (with the law of tourism of 2012 and others) and the Consell Insular of Menorca presided over by Mr Tadeo (deciding on declarations of general public interest) ended up granting the authorisation.

The project, promoted by a well-known hotelier, who now presides over hotel management of the island, planned to create an aqua park in protected rural countryside when other similar installations were always built in urban areas. GOB and other organisations presented formal court depositions and thousands of signatures were collected against the project. In addition, both the technical reports and those issued by the legal department of the Consell opposed the initiative. But, the rulers at that time were behind the promoter.

Besides allowing it to be carried out on rustic land, the project was exempted from complying with maximum urban parameters, so that the area of occupation on the plot went beyond 4% to 55%. Also, they were exonerated from the maximum volume allowed, of 1,500 cubic meters, yet the projected buildings were of 2,474 and 1,738 cubic meters.

All of this, we will remember, on protected land, when at only 300 metres from the hotel there were building plots available. Of course, they were not owned by the promoter.

The icing on the cake, put on by the Department of Tourism, certified that the outdoor aqua park would be a very interesting installation because it would help out of season tourism. With these arguments, the Sant Lluís Town Hall, which was the same colour politically, conceded the licence and the works were executed.

All of this was a scandal which, it was hoped, finished in court. First the Court of Palma and now the Supreme Court of the Balearics have directed that the general public interest issue be cancelled. Because of this, the park should be demolished. The Consell Insular, despite the fact that it is now governing for the people that previously were in opposition, is the institution that receives the current sentence. It has been announced already that it will appeal to the Supreme Court in order to try to alleviate the consequences.

GOB believes that the whole file must be checked carefully in order to be able to find out what commitments the promoter made in promising out of season ability, and which have not then been followed up. Also, to see if it makes sense to initiate some penal process for the scandalous decisions that were taken.

Land issues ought always to be in the hands of people who have good sense and do not allow themselves to be influenced by external or internal pressures aimed at favouring private interests. Without these premises, land is destroyed and the image of the institutions is degraded generating legal insecurity.