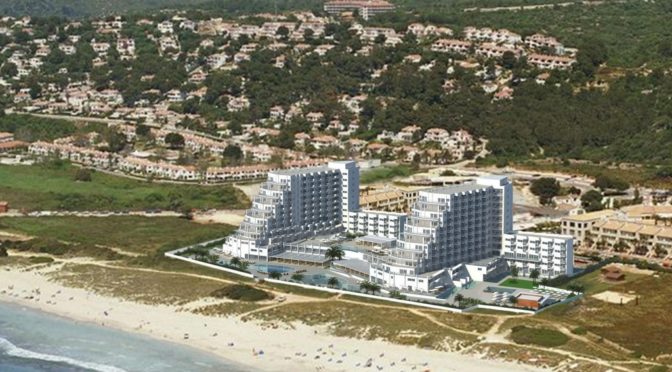 Son Bou is the largest beach in Menorca. The dunes bordering the beach and the water coming from the gullies in the hinterland form a wetlands area that constitutes the second largest one in Menorca. But everyone that has been to Son Bou has a picture engraved on their mind of the two monstrous hotels built on the front line of the coast.

In the 1960s and 1970s, criteria for maximum cost effectiveness and economic dynamics were hardly applied. So, for this reason, the many people who loved the island, were resigned to looking forward to the day when these excessive constructions would become obsolete and there would be an opportunity to remake the damaged landscape sandy again.

But in July 2012 a tourism law (Ley de Turismo) was approved, promoted at that time by Carlos Delgado, a council member of the Bauzá government. Like all legislation made in those years, post crisis, it was announced as though it were a tool for improving competitiveness. It is now known that circumstances can justify many things, but we have to take this opportunity to introduce less worthy aspects of the situation.

The Law 8/2012 of Tourism included an additional fourth provision stating that tourist buildings which need to be improved, could be exonerated for five years from the urban parameters that currently existed. That is to say that until July 2017, projects could be presented making use, yet again, of the urban planning chaos of the last 40 or 50 years, such as happens when there are no rational planning methods.

This is what has happened in the last few days of July. The current owners, the Meliá International Hotels, presented a building project to the Local Island Government and the Alaior Town Council. The project is based on keeping the two parallel buildings facing the sea at the same height, but to add more building on the plots adjoining them. There is no sign of lessening the impact that these hotels have had until now. Quite the contrary, it means combining the buildings and making some small alterations so that they will be able to exist for some more decades.

We at GOB do not believe tourist competitiveness for an island such as Menorca allows us to ignore the enormous impact on it of hotels such as at Son Bou. For this reason, the Local Island Government and the Alaior Town Council have been asked to make sure that everything possible is done to stop making yet another historically bad mistake.

Sometimes, it is thought that the Tourism Law can cover up by legal means something too difficult to explain, but initiatives of governing bodies and the general public ought to put a stop to this. We must watch out for any documentation being processed and immediately start any necessary action. We do not want to perpetuate any inheritance as negative as the hotels of Son Bou.