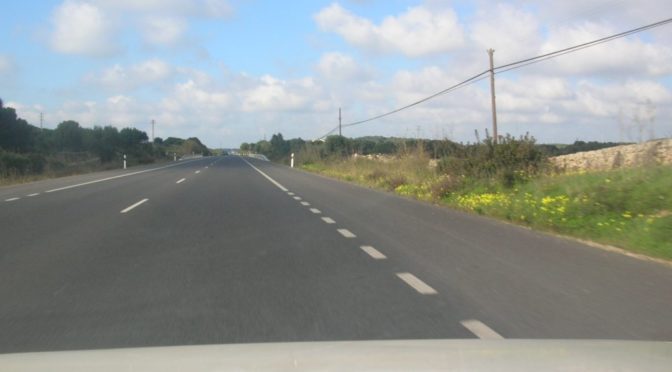 Each time there is a serious accident on a road in Menorca there is reasoned controversy on how to minimize these sad events. Families who have lost someone in an accident have difficulty in finding consolation, and, as a society we are obliged to analyse the ways in which to make roads safer.

The argument of safety is most often used by those asking for doubling the width of the main road across Menorca. However, the available information does not indicate that this will be a way of achieving it. Let us look at the facts.

In the first place, it must be remembered, there are three main factors in an accident: the vehicle, the road and the driver. In our country, the vehicles are usually in a good state. About the road, we talk endlessly. But, the third part, and the most important, is the driver. Driver errors cause accidents on the roads and there are no good roads with bad drivers.

However, if we accept that most drivers are careful, we can get an idea of which are the most dangerous roads by looking at the statistics. This is because when the design of the road is regarded as the fault, accidents accumulate at predetermined points. The Department of Transport publishes annually where these accident black spots occur on roads throughout Spain.

The last annual publication was made available in 2014 but to take a more specific view we can see what the reality is of the black spots found on the roads of the Balearics.

A summary can be seen in the attached table. In short, the official data from the Dirección General de Tráfico (DGT) of the Ministry of the Interior, tells us:

The recently launched campaign for widening the road says simply that “the current main road of Menorca, called the Me-1, is a conventional road with one lane in each direction and full of black spots.”

The facts, not the opinions, demonstrate that this statement on which the campaign is based is completely false. So, whoever promotes it does not seem to be interested in safety but rather is looking for other points but on which they cannot openly admit (such as more speed, political acknowledgement, etc.)

Speed is usually the most important factor at the time of defining the gravity of an accident. Here the statistics are clear. Following the last report of road accidents (2015), 65% of accidents in Spain happened in urban areas and 35% on the main roads. But 74% of the victims who died were in accidents on the main roads. At faster speeds there is a greater risk of severity in accidents. Menorca has at this time the safest roads in the Balearics. And, if what really worries us are the serious accidents, we should not consider doubling the width of the main road because that implies increasing the potential gravity of any accident.

So, we ought to centre our attention on the real challenges in matters of road safety: excess speed, the lack of vigilance at key moments (early mornings at the weekends) the lack of information on any anticipated time saving which can be made (1 minute? 2 minutes? 5 minutes?), the custom in recent times to drive while looking at the mobile, etc. As we see, everything is linked to the driver, not to the road in question.

A much more difficult subject such as the deaths of people in accidents, leads to different types of reactions. Some emotional, others more interested in a political dimension. All are understandable, but as a community, we need to react in the most reasoned way.

The main road of Menorca does not have any accident black spots. As that is clear, road improvements can be made in certain places, but the main problem of accidents in Menorca is not the main road itself.

We at GOB believe that it is good to talk about road safety, but this also implies addressing areas such as the problems of the enormous increase in tourists in midsummer, rented cars without limits, the need to promote more public transport, and make available other types of transport, etc.

Everyone wants to avoid accidents. We aim to consider the real problems and not be diverted by theories which are ill founded.