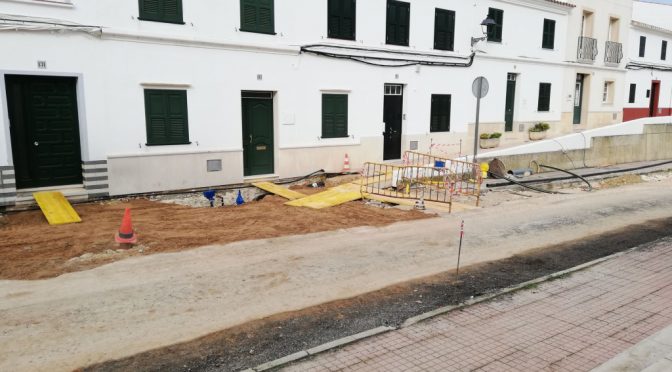 With technical reports and legal opinions against, with a written order by the mayor saying that the licence ought to be given whatever, with two companies standing in the way, no one can see who has the concession for gas. In Es Migjorn, the argument on piped gas has taken on new dimensions.

At the end of March 2015, a month and a half before the elections, the Balearic Government of Ramon Bauzà awarded the company Gas Natural Fenosa permission to carry out and run the distribution installations of natural gas in Menorca. The reason for this work, which implies opening more than 500 kilometres of ditches along the streets of most towns and urbanizations, is just not understood when everyone is committed to renewables.

In fact, this resolution was only the first of a series of formalities required for carrying out the works. Before starting installations, arrangements should be made for a declaration of autonomous interest, for granting a public utility, for administrative authorisation of the Government and for evaluating the impact on the environment. None of these formalities was carried out in relation to the works of Es Migjorn; but the machines have dug up the streets.

Formalities initiated by a construction company

In May, Antonio Gomila SA was the construction company that asked the Town Hall for permission to install gas piping in various streets in the village making use of the fact that they had been awarded the work, by the Consell Insular, for repaving after the installation of fiber optic. Antonio Gomila SA has no relation with Gas Natural (which now calls itself Nedgia).

In their written document Gomila argued that they were working with another company called Climaigas Menorca SL, which acted as promotor for the work. The final object, claimed in the document, was to be able to offer the work afterwards to the company which had been awarded the provision of the gas service, Nedgia Baleares.

After some months since the request had been made by the construction company, the Mayor wrote to the municipal services saying that the conditions they considered necessary had been included and that the licence should be given.

The technical report as well as the legal report sent out were explicitly against the concession of a licence. They warned that neither Antonio Gomila SA nor Climaigas Menorca SL has the necessary authorisation to install piped gas. They also warned that Nedgia (previously Gas Natural Fenosa) were still processing the necessary requirements to do the work. And they added that the Es Migjorn municipality did not forecast installation of piped gas.

But, despite the arguments, the vote was passed: the Mayor and two PP councillors voted in favour and three socialist councillors against. It was approved by the Mayor’s casting vote.

At the end of June, after the vote, a licence was conceded to Antonio Gomila SA (Climaigas Menorca SL did not appear on the resolution). At the end of three months, Gomila said that they had come to an agreement with Nedgia Baleares and changed the concession of the licence to them, so that the development company became Nedgia.

Let us remember that, as has been said, and according to the technical reports and legal opinions, Nedgia (formerly Gas Natural Fenosa) was short of various correctly completed authorisations required to start the works. But, as can be seen from the photographs, the streets in Es Migjorn have been dug up.

It has not been easy to consult the files of the case. GOB has been asking for them in writing for five months having to insist repeatedly. After checking the existing information, it is preparing a formal appeal against the concession of the licence.

Furthermore, they have already presented documents asking to consult the files of other municipalities where it is known that gas works are intended: Es Castell, Mahon and Es Mercadal.

GOB has always given its opinion against having to dig up the streets of all the towns in order to make the arrival of a new fossil fuel energy possible which, in the greater number of cases (if they were to get all the clients estimated) would mean a saving in emissions of no more than 1.6%.

The energy commitment for Menorca should be to invest in renewables. Gas would only make sense if applied directly to the central power station as a temporary measure as it is less contaminating than either the fuel or gasoil currently used, or for isolated, interested industries. In the opinion of GOB, the huge cost of taking gas to houses is not in the public interest and, in any case, as nothing else offered is acceptable, GOB will continue working to avoid it.