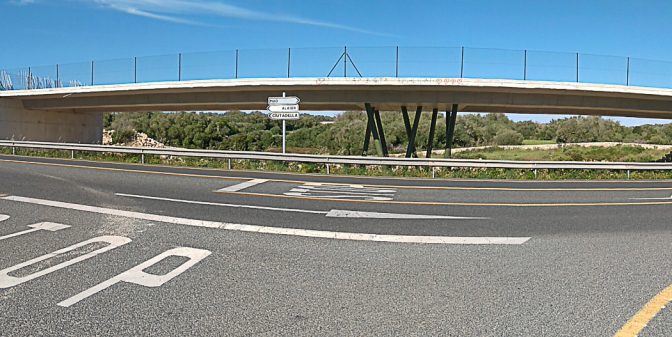 The problem resulting from the half constructed bridges of l’Argentina and Rafal Rubí is that the plans cannot prove any aspect of safety or legality. Now it is like a festering wound that is difficult to heal administratively because technical reports are being requested from the same professionals that took part in their design.

The preliminary technical reports that are known nowadays, if read without emotion, leave it clear that it is not illegal to commit ground level solutions for the main road. A point which is obvious when looking at work already done, with all the favourable reports, between Ferreries and Ciutadella.

In reality, on this western stretch of the main road, the double level roundabouts previously proposed have been eliminated and solutions at ground level have been applied. Let us remember the case of the Naveta des Tudons, with a very similar problem to that which is now at Rafal Rubí. At Es Tudons, a double level structure was drawn up that seriously threatened the landscape of the most visited archaeological monument of the island. A commitment was finally made to construct the turning at ground level.

Similar action was taken in front of the quarries of Son Sintes and Son Planes. And we are reminded that the government officers of the previous mandate also drew up plans as a solution for the road to be at ground level for the entrance to Ets Alocs arguing that to make a structure of two levels would have “a high impact on the landscape”.

It is also worth remembering that the project was chosen as the best from 16 proposals, and during the selection process the government officers, in 2012, did not incorporate any roundabouts of two levels. The controversial structures were added, after a few months, by the Council office, with the collaboration of the people that are now sending in the reports.

It is, therefore, quite evident that solutions to be made at the same level as the road are legally applicable on existing roads. Currently, the real debate for the portion of the road between Mahon and Alaior, however, is not this, but is about the advisability of whether or not to pull down the half built bridges in front of L’Argentina and Rafal Rubí.

These two bridges (and the one projected at Biniai which has not started) were the reasons for the public action taken and the protests made by people from across a large political spectrum.

In L’Argentina and Rafal Rubí there is a conflict of interest between the half-built structures and their impact on the landscape. This conflict is recognised by the Commission of the Environment of the Balearic Islands who, after analysing the alternatives, sent a verdict, published in the official government Bulletin, saying that, from an environmental point of view, there would have to be a solution at ground level for L’Argentina.

Public conflict of interest exists, also, in the case of Rafal Rubí, where six public groups are asking for sensitivity towards the opinion of UNESCO relating to the landscape environment of archaeological monuments, in the candidature of Menorca Talaiòtica.

The heritage report commissioned on this matter containing an expert landscape appraisal, sent a verdict which was overwhelmingly in favour of requesting a solution that would not raise the height of the road.

It is also essential to remember that Menorcan roads are the safest in the Balearics. A positive and important point is that for many years at no one place have repeated accidents been registered. For these reasons any improvement incorporated into the road will make it even safer and, therefore, it is a fallacy to say that the only safe options are the double level structures.

The economic aspect does not appear relevant if the project as a whole is considered. The added cost of pulling down the bridges can be compensated for by the saving on the enormous constructions not undertaken such as that at Biniai. It should be recalled that the project awarded in 2014 was stopped because the real costs were much higher than the available budget, so that the company awarded the work preferred to cancel the contract.

The controversy over the main road of Menorca is a debate on the proportionality of the interventions. The provisional technical reports which are being defended recognise that between a double level roundabout and a road level one there is a difference of 26 seconds in the flow of traffic. These 26 seconds have to be balanced against the impact on the landscape and on the archaeological environment.

The public officials, the people who have been chosen at the elections, are those who have the responsibility to balance and resolve the dilemma. But the public administration of the government is unable to proceed without reports.

The impasse in the argument on the portion of the main road between Mahon and Alaior is caused because the technical reports are made by the same people that submitted the reports for the project in the first place and they are incapable of retracting.

The only legal way out is to obtain external reports. There are earlier famous cases, such as the external reports sought in 2014 to authorise the aquatic park on protected rural land, until one was found which allowed for out of season tourism.

In the case of the road, public interest of things at stake is unambiguous. But it seems that the current government members do not want to use the resource of external reports.

The arguments that have been used for some years to oppose the double level roundabouts on rural land continue to be valid, even though so many have become part of a circle from which there seems no escape and where it appears there is insufficient political will.

One thought on “The main road sequestered”