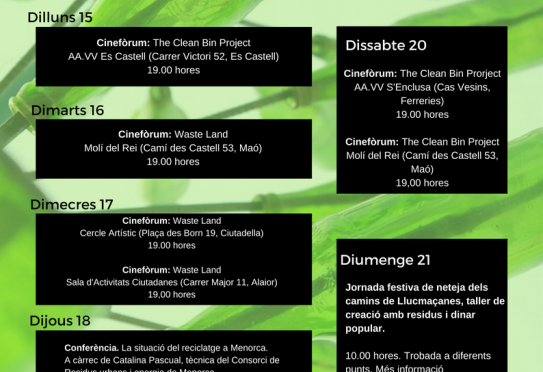 These days, filled with various events, includes the Week of Rubbish and Recycling in Menorca from 15 to 21 May. The week will be made up of films to be shown in different localities, conferences for understanding the management of rubbish on the island and the experiences of recycling in other places, and also a day of collecting and taking away rubbish from roads and paths.

On Monday 15 May, at 19.00 hrs, there will be a film session at the Associació de Veïns in Es Castell. Here the film, The bin project will be screened, which tells the story of the adventures of a young couple from Canada, who had a full year trying not to make rubbish in their daily life. The consequences are amusingly told and it shows the possibilities of better rubbish management.

On Tuesday 16 May at 19.00 hrs, there will be another projection of a film in the Molí del Rei, in Mahon (the offices of GOB) called The Waste Land which documents the life of some pioneering initiatives of large garbage dumps in Brazil.

On Wednesday 17 May at 19.00 hrs The Waste Land will be projected in the Cercle Artístic de Ciutadella and in the Sala d’Actividats Ciutadanes in Alaior both at the same time. This coincides with the World Day of Recycling.

On Thursday 18 May at 20.00 hrs, in the Molí del Rei in Mahon, there will be a conference on the recycling situation in Menorca, organised by the Consorci Insular de Residus i Energia de Menorca.

On Friday 19 May at 9.30 and 13.00 hrs, there will be seminars to learn the experiences of door to door collection in Argentona (Catalonia) and from the Mancomunitat des Raiguer (Mallorca). Please send an email to administracio@gobmenorca.com to attend this event which is free.

On Saturday 20 May at 19.00 hrs the film The Bin Project will be shown at the Cas Vesins in Ferreries and in Mahon at the Molí del Rei both at the same time.

On Sunday 21 May we are joining in with the initiative Clean up Europe, which will be an activity of collecting rubbish from four roads leading to Llucmaçanes during the first part of the morning. People wishing to take part should send an email to administracio@gobmenorca.com and they will let you know the meeting points. In the middle of the day, at the entrance to Llucmaçanes, there will be some workshops showing how to make bird feeders and other items from recycled materials.

At the end, there will be a meal at a reduced price. Though it is possible just to go along to eat, it would be preferable if you would register your attendance in order that enough food will be available. We ask that everyone brings a plate and cutlery. administracio@gobemenorca.com

The Week of Waste and Recyling is a joint initiative between GOB and the Consorci Mestral-GOB, with the sponsorship of Ecoembes, and the help of the Consorci Insular de Residus i Energia de Menorca.