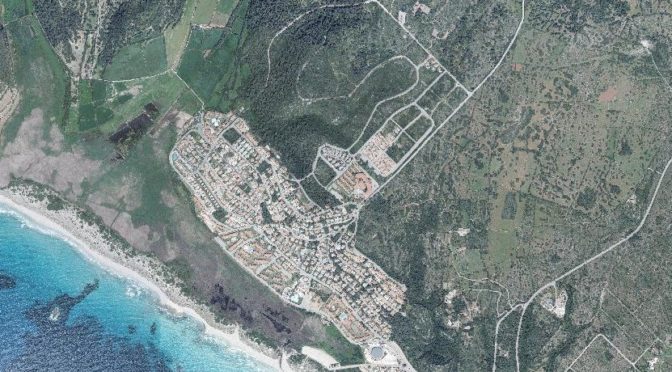 In the past few days the Alaior Council has made public that definitive approval has been given for the urbanisation of Sector 2 of Torre-soli which includes provision to construct a new hotel of 450 places and 400 villas. GOB has made an appeal pointing out the deficiencies of the approval.

The beach of Son Bou and its surroundings has been one of the places which suffered drastically from unlimited urbanisation during the 1970s and 1980s. The urbanisations called Son Bou, and Torre-soli, make conurbations which cause eyebrows to be raised by many.

When processing the PTI (Planning Permission) of 2003, a large part of the intended expansion could be disqualified, but not all of it could be stopped because of the problems of compensation. In many urbanisations there are areas abandoned for this reason, but with the passing years, they finally become consolidated into building zones.

The project of Torre-soli implies adding more accommodation capacity for summer tourists. And this is exactly the opposite of what we need. However, the environmental requirement which GOB raised and was incorporated at the time could curb imminent works.

The area in question has a water purification system which is very old and unstable. The forecast population increase (more than 1,600 people) cannot be absorbed by using these existing sewerage facilities.

The project which has been passed suggests that they can go ahead with building and remain within the maximum range of the existing sewerage plant. But this plan contradicts one of the obligations established in the Plan Parcial (conditions for building projects) which says that enlargement of sewerage plants must be made before the commencement of urbanization building, and also authorization must be obtained in advance for the modification for a larger landfill and its status.

That is to say, first of all in the process, a new sewerage plant must be made and then, all being well, building can start.

Based on these conditions, GOB has presented to the Alaior Council, an Appeal for Replacement (of the decree) asking that the Council Decree referring to the definitive approval of the urbanization project of Torre-soli, includes the explicit obligation to make an enlarged sewerage plant available before starting any building.