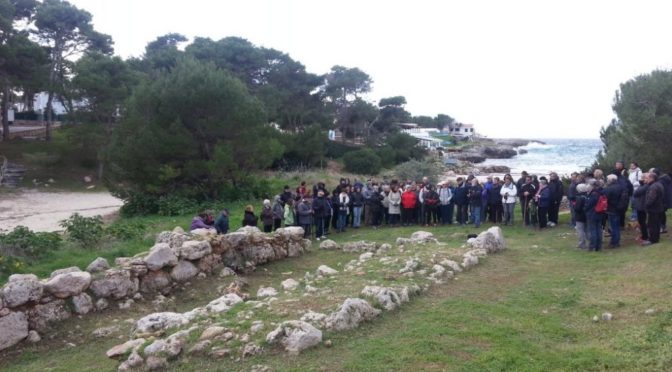 More than 90 people showed sufficient courage to defy the bad weather forecast and joined the excursion organised last Sunday by the Consell Insular and GOB because of the festival of Sant Antoni.

On a very windy morning, people met at the entrance of Cala Blanca where they heard a talk given by Luís Plantalamor, a previous director of the Museum of Menorca, on what is known about the megalithic chamber remains found near the beach. It seems to have been a building for domestic use built about 3,700 years ago.

The route started towards the south bordering the cove while the waves which were coming from the north made the sea very rough. After a while, the walk left the urban part of the Camí de Cavalls and continued along the undeveloped coast. The sky was clouded beautifully and a clear outline of Mallorca could be seen on the horizon.

After a short distance, the route came to the old battery of Son Olivaret, which is still the property of the Ministry of Defence but is not now operational. The area has become very overgrown with vegetation, while the buildings show years of neglect.

However, an ancient sepulchre from the pretalayotic era is to be seen here. It was excavated some years ago so allowing a large amount of information to be found on more than one hundred skeletons and objects from different periods. An ancient and partial collapse of the building had helped to preserve the remains of the earliest burials. The archaeologist Sílvia Villalonga was the guide for this sepulchre.

The tramuntana wind blew even more fiercely and the sky, despite having given the walkers a respite, was threatening rain. It was very comforting to be able to take shelter at one of the buildings where there was a selection of local products available from farms signed up to the Land Stewardship Scheme. The sun managed to shine.

A bus service returned the walkers to the starting point. It was a Sunday of nature and culture in the depths of a Menorcan winter.