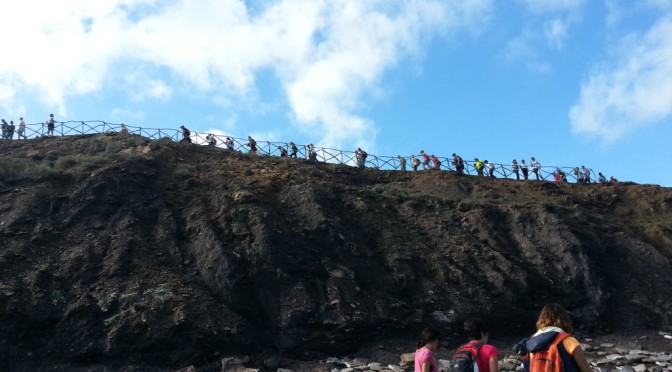 The autumn day of last Sunday was so clear that it seemed like spring. It was a warm, windless day, with a completely calm sea, making it ideal for a GOB excursion which was organized with help from the Mercadal Council.More than 150 people joined to start the walk from the Cavalleria car park. After a little way along tarmac, the walk turned east where a juniper wood welcomed the start of the Cami de Cavalls.

The north coast has many beautiful beaches and coves surrounded by very interesting vegetation, such as the distinctive mounds of small socarrells, well adapted to the wind and salt. The walk stopped at the Macar Grande de Binidoaire, where a talk was given on the most ancient rock formations of Menorca, some 410 million years old, which stick out here so markedly.

The slow formation of these sedimentary rocks, formed in the bottom of a deep sea, situated in those times in the southern hemisphere, their subsequent movement, and, as a result of incredible orogenic forces, their emergence as land with curved stratas of rocks from the earths crust, is an example of the enromous changes which have taken place on the planet during 4,550 million years of its existence.

The subsequent discussion reflected on the comparison of 400 millions of years since those first rock formations appeared with the little time in geological terms since humans appeared. Many species, among others the powerful dinosaurs, became extinct from natural causes, but other types of life developed. So, environmentalism cannot aim to save the planet which will continue its course, but can aim to maintain the environmental conditions needed for the continuation of the human species.

After a rest, the walk continued. From here, the socarrells became much larger. These are a different species, unique to Menorca. In this area, they are usually accompanied by camomile which uses the shelter given by the large mounds for its development.

The magnificent Tirant beach, with a stream swollen in size from the force of the recent rains, was the last section of the walk before reaching the urbanization from where the bus service, paid for by the Mercadal Council, collected the walkers and took them back to the start point of the walk. Smiles and good will accompanied the farewells.

The next meeting is an excursion concerning an environmental challenge. On 29 November, marches are being organised all over the world to petition that the Summit on Climate, taking place at the beginning of December in Paris, will reach effective agreements to combat climate change.

In Menorca, the march will go to the Park of Son Salomό in order to consider ways in which we can help at a local level to contribute to this cause. People will meet at 9.30 in the morning at the Ciutadella Cathedral Plaza.