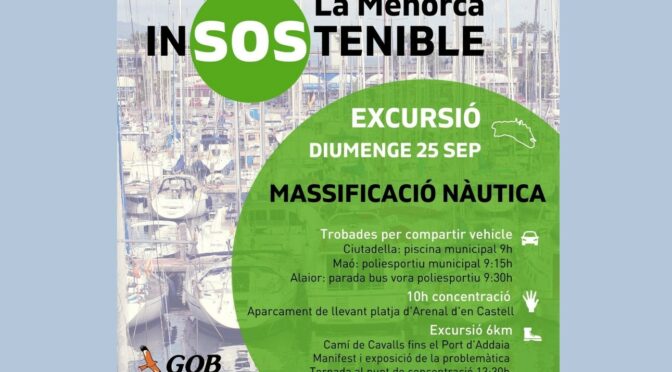 The first of the excursions for the campaign “la Menorca in-SOS-tenible” (unsustainable Menorca) will start and will show the main problems of unsustainability found in Menorca.

On this occasion, it will deal with nautical overcrowding. Menorca is making an official study that measures the capacity of the nautical load and it shows that it has been exceeded over the last 12 years.

Despite the availability of this study analysing the nautical capacity including boats from all the coves and beaches of the island, there are still further projects underway that will significantly increase the allocations by adding more boats into the sea.

For those people who would like to participate, you should meet at 10 h at Arenal d’en Castell, in the car park on the east side of the beach. Earlier meetings to help share a vehicle will be in Ciutadella (municipal swimming pool at 9 h), in Maó (polideportivo at 9.15h) and Alaior (at the bus parade near the polideportivo at 9.30h). there is also the option to take a public bus ( https://menorca.tib.org/autobus )

We will walk to the port of Addaia, where a project is being processed to double the size of the marina. There a manifesto will be read on the general problems of nautical congestion. We will then return to the start on foot.

In total, the walk will be a little more than 6 kilometers, of minimum difficulty. It is estimated that the return to the vehicles will be about 13.30.

If maintaining the Island economy involves all these problems, then it is important to find a new economic model. This way is unsustainable and requires much discussion.

These are the reasons for inviting everyone who wishes to participate in the first walk. Please forward this notice to all your friends.