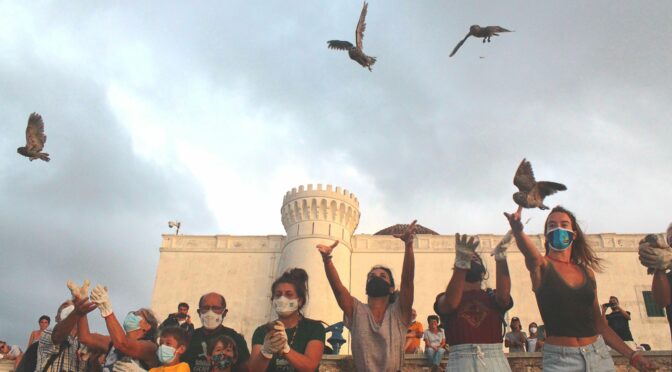 On Wednesday 4 August, volunteers from the Recuperation Centre for Wild Animals of Menorca met on Monte Toro to free 8 young owls reared during the last few months.

The owl (Otus scops or, Scops Owl in English) is one of the smallest nocturnal bird of prey in Europe, with its imperceptible flight, silent to our ears, and it has discreet camouflaging feathers. These characteristics help it to hunt for its food during the night (insects, small mammals…)

It lives in Menorca all year round, in marinas, agricultural areas and in our towns. During spring and summer, it increases its numbers with individuals coming from Africa. It breeds in sparsely wooded areas, urban parks and holes in old buildings. It can also use cavities in tree trunks and the abandoned nests of other birds.

Owls usually lay from 3 to 6 eggs. The females incubate the fledglings for 25 days and though they leave the nest after 21 days they are unable to fly properly until 33 days. During these days of impasse the owls are often vulnerable especially in an urban areas, where there are dangers such as attacks from dogs and cats, and stresses caused by humans, etc.

Each summer many of the chicks are brought to the Recuperation Centre for Wild Animals thanks to help from the public. The professional team and volunteers look after them until they are able to fend for themselves.

On the 4 August, the process culminated with the liberation of most of the small owls that have arrived this year, releasing them from Monte Toro at sunset when they began to fly away.

The Centre for Recuperation of Wild Animals is found in the Lithica Quarries and during the summer is open from Mondays to Saturdays from 6 pm until sundown. During July and August there are family workshops on Thursdays with educational environmental activities to learn about the different species that there are at the Centre. (Owls, kites, hedgehogs etc)

The Centre functions thanks to an arrangement by GOB with COFIB, the entity that is in charge of the recuperation of wild animals in the Balearic islands. It also has help from the island governing council, the Agency for the Menorca Reserve of the Biosphere and the town councils of Ciutadella, Mahón, Es Mercadal, Ferreries, Sant Lluís and Es Castell and some businesses. However, the help of individuals who sponsor some of the resident animals is essential as well as that of the dedicated volunteers who help with a multitude of tasks in the hospital.

Unlike other years and because of the health restrictions the event was not advertised and only the volunteers from the Centre were able to attend the release.

We would like to thank all the volunteers and those involved for their sense of responsibility towards nature. The protection and recovery of wild animals is a delicate job but at the same time very gratifying and important for the equilibrium of the environment.

Following the release, we hope to hear that special song of the owls in the evenings, a good indicator of the state of nature.