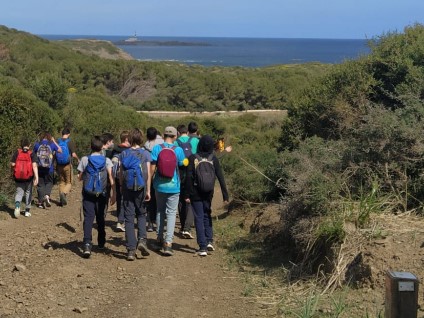 Despite its size, Menorca’s landscape and biodiversity are extremely varied. In addition, its culture is multifaceted and the reality of its model of production is complex. There are many ways to relate to the island depending on the childhood and opportunities of each person.

GOB’s Environmental Education Service wished to promote this diversity and motivate a number of young people with the project “Outings for Sustainability” by combining healthy hiking, with learning the geography and geology of Menorca and the ecological sensitivity that surrounds the most recent environmental problems of the island.

In order to promote contact with and gain knowledge of the environmental values and cultures of the island, for the young aged 12 to 16 years old, we have walked 6 routes representing key areas of Menorca since January. On each itinerary, we have talked about its natural characteristics and debated the environmental problems caused by our eating habits with the young participants and their incipient spirit of reflection.

The first outing was from Es Grau to Favàritx where we learnt the colours of Menorca’s geology and its relationship with winds. The same scenario served to discuss pressures placed on the environment – that is to say, how the environment is affected, if we do not go on excursions in a responsible manner. On the second outing, we went to the south of Es Migjorn and Ferreries where we learnt about the biodiversity of the ravines, the wetlands the holm oak woods, the history of the charcoal makers and burners. The old model of energy production and consumption reminded us to value our modern comforts and to take responsibility against abusing the use of electricity.

On the following outing the landscape of the Cala en Porter ravine to Son Bou, showed us the ways the inhabitants of Menorca have had to modify their landscape throughout history from the talaiotic villages to modern agro tourisms, considered through the traditional architecture of farmworkers, the ravines of fruit orchards and the coastal hotels. Some weeks later, we would see the edge of the east coast and learn about the aromatic plants on the land and the importance of the marine reserves.

At the beginning of the summer, we made the next outing from Pilar to the beach at Algaiarens, focussing on agricultural animals and their importance in maintaining a natural ecological equilibrium. Finally, in the area north of Ferreries, we had an agreeable twilight walk following the fences that run along the Tramuntana road to Ferreries, crossing the Ruma area and observing the different forms of agricultural exploitation, paying especial attention to the important role of the public as consumers of local and sustainable products.

In conclusion, the outings showed us the various landscapes of the island that represent its diversity, and which it is our duty to look after and improve. The countryside has been a fount of inspiration for different discussions and debates on sustainability that we wanted to share with the young in Menorca.

To round off the experience, each outing has included a picnic of the healthy food that is produced on the farms that are a part of the Land Stewardship Scheme and where we were able to observe their cultural value.

From the beginning of the winter and its short days with the empty beaches, we have been getting to know snippets of the island, watched how the days lengthen until the heat and rhythm of the summer.  From these 6 routes we have learnt to love Menorca’s emblematic spaces and have helped the young of different backgrounds to reflect on the island’s diversity. Surely, these pathways will lead towards understanding the health and sustainability of our environment.

GOB’s Environmental Education Service, wishes to thank all the participants and helpers on this project and especially the Menorca Cooperative Fund (Fons Menorqui de Cooperació) for its Education Project for Global Citizenship and Local Development, which has been the main sponsor for this project.

We encourage everyone to find routes and continue walking.