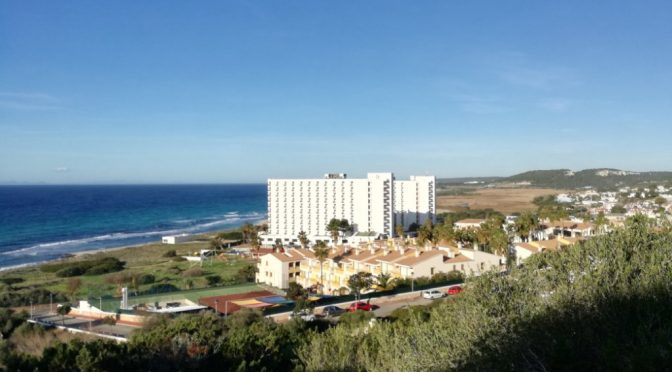 The technical and legal services of the Alaior Town Hall have confirmed the version that GOB has been putting forward for some months. There is no record that the two enormous hotels on the front line of Son Bou had a licence for them to be constructed to the size that they became. Therefore, it is not possible to accept plans that aim to strengthen and enlarge these buildings even more and which would last for some decades to come and have a huge detrimental impact on one of the largest landscapes along the coast of Menorca.

The company, Meliá Hotels International, SA presented a project in 2017 to modernise the two hotels on the beach of Son Bou. They aimed to make use of the Law for tourism of 2012 which said that tourist buildings that needed to be improved had five years exoneration from the urbanising parameters which existed at the time.

In practice, this availability implies that some of the works that caused the worst impacts in the Balearics in the sixties and seventies, when there were not yet criteria for rational nor democratic management, may now be rigged to allow for renovations that could last another fifty years.

In GOB’s opinion, this would be an error of historic proportions. In Menorca it is difficult to find constructions along the coast more out of keeping than those at Son Bou. In an island that has worked so hard to manage its landscapes, it is unacceptable that well advanced into the 21st century it has not been seen as necessary to take advantage of improving the establishments by rectifying the errors made at the start of increasing tourism.

As the institutional will was to authorise the licence that the company has requested, GOB went to consult the enormous historical files on Son Bou. As a result reports were found that had never been seen by the public.

There were many particularly notable points. How, for example, could the person that was the municipal architect at that time (in the seventies) also act – as noted in the same record – to give building approval to the land owners.

It was, perhaps, for that reason that the most bizarre report that has ever been written on urban planning questions of Menorca was written; “the protection of the landscape is total owing principally to the placing of the architectural edifice on an area thought out and studied, the composition obtained remaining integrated with the physical space around it and including being able to go ahead with the two vertical tower blocks placed in a position perpendicular to the coastline and contributing to the creation of the recommended landscape; not interfering with the views from the lookout points to the sea nor the views of the hills; the solution adopted completely negates the need to build a screen…”

But, most significant, was finding that the licence granted was subject to building parameters of 0.2 m3/m2. Comparing these figures with the reality of the edifices it is possible to deduce that it was constructed 14 times larger than allowed and that more than 90% of it has no legal basis. If anyone realised at that time they looked the other way.

Consequently, GOB wrote to the Alaior Town Hall advising of all the defects in the recently submitted project for modernising the hotel. Current experts have not found any other licence that might cover the legality of the hotels. In other words, the two tower blocks that destroy the image of Son Bou are outside the law and cannot benefit from the intended modernization.

In any case, they should first ask to make the buildings legal, which could be achieved by altering the current height to that allowed by the building parameters for Son Bou (ground floor + 2), and, which, furthermore would significantly decrease the impact made on the landscape.

The idea that the company and certain institutions are now trying to put forward is to gain planning permission for the two plots of land on each side of the hotels. This, in the opinion of GOB, has no legal recourse. These two areas were beyond planning permissions allowed by the Pla Territorial of 2003 and it is not possible to make decisions after the event which are both arbitrary and do not conform with the law.

Any building on the front line, which now represents a huge historical error, ought to be reconsidered. The companies which are exploiting these two hotels have more than amortized them. Now is the time to return a part of the benefits they have gained, as a gesture of good will, to the island and plan a reconversion that eliminates the appalling impact on the landscape made by these two tower blocks.

And the Balearic legislators must be asked to eliminate favours given for obsolete buildings for tourism especially for those whose impact on the landscape is so destructive. They should, also, maintain the current Tourism Law 6/2017. It is unacceptable that there are still current regional laws that make it difficult to redirect any errors made before the arrival of democracy.