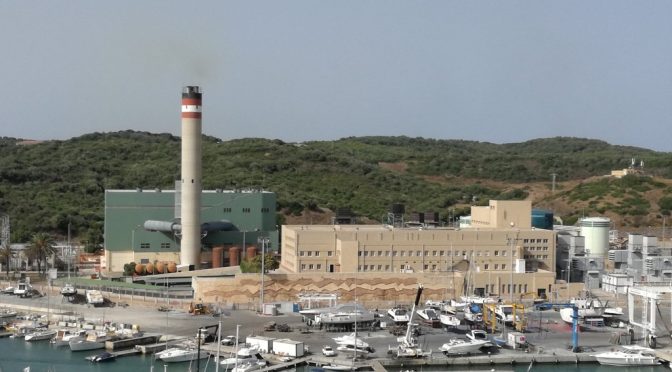 GOB has sent a complete report on the environmental problems generated by the central electricity power station in Mahon to the new Minister of Energy and the Environment, in the transitional government in Madrid, Teresa Ribera, asking for favourable regulations concerning renewable energies in order to reduce contamination.

In the brief sent last week, GOB describes and documents different areas of the problems resulting from the by-products of the central electricity power station that now works by burning fuel and gasoil.

The brief talks of approved files still open which allow more hot and chlorinated water than is permitted to be thrown out into the Port and for the power station to have been working for another seven consecutive months without any emission control.

It explains how the turbines were installed and that do not comply with regulations currently in force making them use emergency motors, which are then in use for more than the maximum permitted 500 hours per annum.

Attached was the study from the National Centre of Epidemiology which advised that the central power station has one of the highest levels of polluting contaminants at state level which affect the health. The Minister has also been sent the report on the economic costs that the power station has provoked in environmental and health terms. This is estimated by the European Agency of the Environment as between 91 and 257 million euros per year.

At the same time, the Minister was advised of the loss of the connection with Mallorca by the broken submarine cable which inexplicably had no maintenance nor substitution plan available so implying that, from one day to the next, the Central Power Station had to increase its activity by 15% and go beyond the parameters indicated above.

The Minister was informed, also, that Menorca produces only 3% of its electricity from renewables, and she is asked for separate and urgent treatment to alleviate the environmental situation caused by the current electricity production using fossil fuels.

Finally, GOB explained that the channelling of purified water, as promoted by the Endesa company, to inject into the combustion towers of the central power station is a technology that could be used only to lower the NOx gases but not to reduce the CO2 emissions, nor to eliminate the current dangerous particulates. Furthermore, it would contribute to increasing the sulphate deposits.

GOB does not share the idea that these problems can be solved by using two submarine cables as suggested by the representatives and spokespersons of the Endesa company. Now we have no cable at all and, as yet, we do not know when we will have one, let alone two.

In GOB´s opinion, any commitment to wait for two cables and then to activate more efficient central power stations in Mallorca, returns to being the traditional strategy of doing nothing and letting everything continue as before. Menorca cannot continue with an obsolete central electricity power station functioning overtime. What would be best would be to reduce the hours it works and generate renewable energy from the island itself.