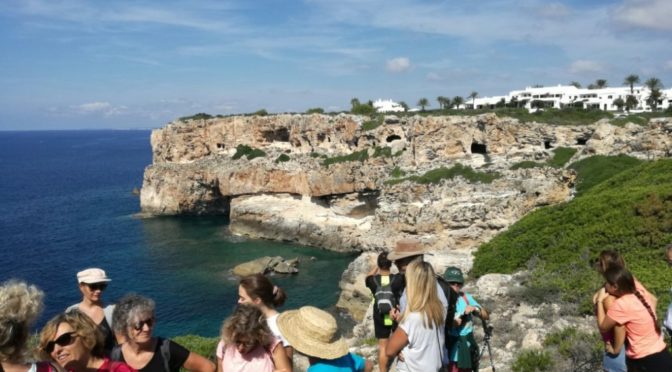 Sunday 24 September, was the restart of the series of talayotic excursions which are organized jointly by the Department of Culture of the Consell Insular and GOB. After two months of seasonal rest, a hundred people replied to the announcement for a walk and a visit to an archaeological site.

The itinerary for the CamÍ de Cavalls towards the west began at 10 o’clock in the morning. Soon, the path dropped down at the start of the Biniparratx ravine, before rising up again. But, after that, the hike was generally along a plain.

The walk continued and it was noticed that between fences were fields which for some years have not been cultivated and wild vegetation has overtaken them, then there was a cluster of trees which grow near the road of Binidalí alongside some isolated houses. After crossing safely the road, the walk passes the imposing properties of Santa Catalina and Sargossam.

To avoid having to walk along too much of the road to Canutells, where this part of the Camí de Cavalls goes, negotiations had been undertaken beforehand, to allow us to be able take a route along private property. The walkers passed through some cultivated areas, and were surprised by encountering so many tortoises. Some ancient poles were observed serving to shore up the last wall.

Shortly afterwards, we arrived at Castellàs de Caparrot de Forma, a coastal defence area from the Talayotic period, constructed in such a way that they could observe when they were about to have confrontations between people on the same island.

An archaeologist gave a large amount of information on the discoveries and the theories that there are of this site and helped to recreate a vision of what could have been the lives of that time. There was also a visit to the caves used for ritual funerals.

To end, there was a bus service taking the walkers back to the place of departure, ending a pleasurable Sunday morning.