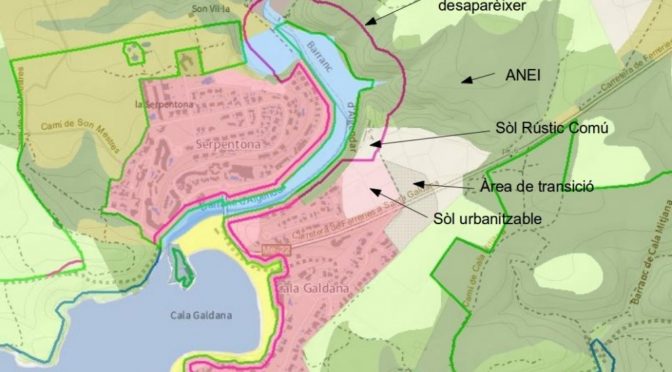 Changes in the coastal law on protective boundary lines for public areas are being detected. In this case, it is in an area attached to the urbanization of Cala Galdana that is giving cause for concern.

The last time boundaries along a public area were fixed was in 2008 incorporating a protected area and was for the pavement at the end of the river in Cala Galdana that separated the municipalities of Ferreries and Ciutadella. The Coastal Law says that the terrains adjoining the interior limit of the shoreline are covered by protection rights which will give the pavement a width either of 100 metres or of 20 metres depending on its urban classification.

So, a proposal made in 2008, took that into account, but the association of property owners of the pavement to the west of the river made an appeal, which was submitted to Costas (the department of the Ministry of Environment in charge of the coast) and which involved losing this protection. Now that it has been published officially GOB believes that the argument used does not relate to reality, so we have also made a counter appeal to ensure that protection is maintained.

It can be seen that the area which would lose the protection is largely qualified as ANEI (Area of Natural Special Interest) on which no building is allowed, but would leave 6,000 square metres considered as communal rural land and which is now being taken over by the urban area. Thus, with the disappearance of protection from the communal land, it becomes an area which could be reclassified at a politically favourable moment (see map attached).

As it happens the same society that is dealing with this (Aprovechamiento Terrenos Diseminados SL) achieved the purchase of a large area in Cala Mitjana when Jaume Matas was minister. This was the same person who, in the last government, transferred some land supposedly free of entailment to the Councillor Alejandre for making a new car park to service the beach. In reality it was accompanied by a commitment for this rural land to be possibly reclassified as urban.

The argument by this society now to unprotect the area of the river at Cala Galdana is based on an article which says that the areas flooded as a consequence of human work are not subject to protection regulations. However, the areas in question were flooded in 1956 before the beginning of any urbanization work in Cala Galdana.

GOB demonstrates all this with illustrated documentation in its Replacement Appeal which it has presented to the Ministry of Environment asking for the protection associated with public areas to be maintained as the Law describes.