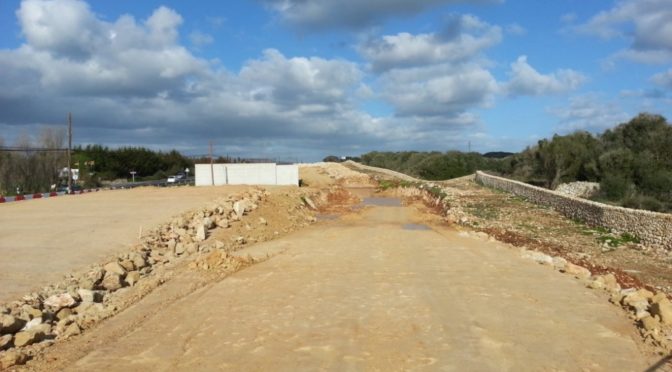 The PP (Partido Popular) representatives at the local Island Government of Menorca has presented a petition demanding that the structure to serve as a roundabout of two levels at l’Argentina, should be kept just as it was proposed.

These PP representatives say that they have technical reports and that there is no justification in demolishing the currently initiated construction. GOB wishes to recollect some of the things that were said, both the pros and the cons, between 2013 and 2015, when Menorca lived through the heated controversy over the designs planned for the whole of the main road.

There is much material on this subject. Many articles were written, numerous information events were organised, and alternatives were debated unstintingly. But as nearly two years have now passed it is an opportune moment to remember some of the essential information.

The design for the section of the road between Mahon to Alaior, started on the 30 August 2011 with a tendering process called by the Island Government, governed by the Partido Popular, the party that had been elected in May 2011 with an absolute majority. 16 proposals were evaluated and a winner was chosen. This design, picked out from all the others, did not include a double level roundabout.

But within the party there were debates and opposition. In the island’s western section of the party, they openly demanded doubling the width of the whole road. There was no money for any work like this, so it was decided to do something for appearances. And it was for political reasons that they ended up designing four double level roundabouts: Biniai, Rafal Rubí, l’Argentina and Alaior.

There was immediate public opposition though there was agreement that something in this style could be accepted only at the entrance of Alaior, which services the industrial estate and is the third largest town on the island. Although the first winning project designed a large roundabout at the same level as the road, no dispute arose for the subsequent double level structure at Alaior as demanded by PP.

But there was a great deal of argument over the other three large roundabouts – and this is the important part – it was not only the public whose opinion was against. From the first, the technical reports issued also pointed out that these were both disproportionate and difficult to fit into the island’s countryside.

One of the papers which stands out is the technical report of the Commission of the Environment of 17 July 2013, which was part of the Balearic Government, whose president at that time was José Ramón Bauzá. It was, therefore, a report given out by an administration of the same political colour as that of the Menorca local government. We can see what was said with reference to the huge roundabout intended for l’Argentina:

“This underpass and its access roads is situated in the bed of a stream and is partially in a geomorphological plain susceptible to natural flooding (…) for which it is especially important to provide some good drainage to avoid the enlarged road turning itself into a water dyke provoking a catastrophe,” And it continues “Referring to the amount of land to be used, this seems disproportionate in relation to the limited population of l’Argentina. The amount of land required by constructing the four branches and an underpass with an oval roundabout, will be much larger than the current one and it will not be justified by the EIA (Environmental Impact Study).”

The way in which the technical reports were produced and as understood by many people in those years was done by the political party presided over by Santiago Tadeo. They were going to win votes in such a way that they could finally do the work at Argentina, for which large drains should be incorporated, but which they were not intending to install. And the inheritance which this posture has left to the Menorcan community is a monstrosity of cement which does not comply with the technical requirements that had been demanded.

The arrogance of those instituting the subject was confirmed so often and it is unacceptable that this same party that did it, now says that technical reports to eliminate this structure are being forced. Surely, the Councillor Vilafranca can present the petition to the Consell Insular because he is the only person in the party at the moment who was not part of it in its last term of office. But his colleagues know very well the reality of what happened.

When the results of the elections of 2015 were known, the list of candidates that had protested against the outsize roundabouts was elected. Knowing that it would take nearly two months for the governing party to settle in, GOB made a public request that the work of the road be centred in other areas and that there should not be any continuing work on raising structures that the voters had demonstrated that they did not want. Once more, something useless.

GOB continues with the evolving details of the design of the route between Mahon and Alaior and will work so that the project can be redirected to be within the maximum parameters of sustainability. It would set a huge example to Menorca and to the rest of Spain, to be able to demolish a construction which is, as so many others, a monument to inappropriate work.