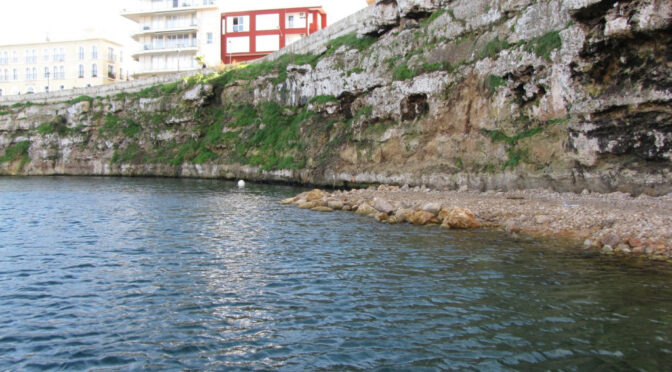 On 20 January, the press reported that the Partido Popular will make a request to the Senate that construction works, currently halted, of the Cala Corb dock should be completed. Political discourse as much as journalistic reviews deserve comment.

The work that the Ports Authority tendered was for a solid wharf in the area of Moll d’en Pons going to the tip of Cala Corb, then continuing with a cantilevered wooden walkway (in the same style as the one at Calesfonts). This was decided because it is much deeper at Cala Corb and a solidly built wharf would be much more complicated and causing a greater impact.

However, half way through the works, large quantities of materials were found being dumped in Cala Corb. This activity did not fit in with the proposed works and GOB asked to consult the project tender. On the same day, the Ports Authority halted the works.

This change in the interpretation to the proposed works was decided while the works were in progress, without any previous authorization nor consideration for any environmental impact. It was claimed that this was because the rocks did not support the walkway very well, yet the tender included a specialist’s report on the solidity of this area of rock wall that assured its strength.

Having to decide whether or not to continue with the work or proceed with the intervention, it was decided that an environmental evaluation from the Oceanic Institute would be requested. Scientific dives made in the area where work had begun found significant damage to the marine environment, given that the rocks go round nearly half the cove. It was also documented that nearly all of a protected coral was being eliminated.

Because of these findings, and according to current legislation, it has to be the environmental authority that dictates the procedure to be followed. As the central government (Madrid) has jurisdiction over the Port of Mahon, the case was communicated by the Balearic Port Authority to the Ministry of the Environment. There has not yet been a reply.

So far, this has been a description of the events as they happened. Now it is time to make some assessments.

The question put by the Senator was not interested in knowing how it is possible that work of this type could have been carried out without any previous study on the environmental impact, which would have avoided generating the consequent conflict.

Nor did he want to know how it is possible to change the nature of the work so drastically after it has been tendered, with the result that other companies could offer better conditions for this tender.

The question from the Senate did not query the doubt that the rocks do not support the walkway when there was a previous specialist report guaranteeing the rock wall’s strength.

Nor did the question have any interest in knowing what would be the environmental effects, nor how to resolve the problems caused by a public work that affects a protected species.

The Senator and the leaders of the Partido Popular are only asking to end the work urgently. Nothing else is important.  That is a shame.

It is a shame because GOB knows, first hand, there are many people in Menorca whose ideology of conservation means that for some time they have understood the importance of environmental issues and that defending them should not be linked to a particular ideological vision.

Here the leaders of the main conservative party still mean to stop access to the municipal files and then declare procedures to be completed urgently, with the intention of keeping hotels, such as those at Son Bou, without facilitating any reduction of their impact on the landscape.

Or, they make it impossible for files to be seen that show environmental offences such as those that have facilitated seven illegal swimming pools. Or, they place themselves on the wrong side of the Law of the Reserve of the Biosphere.

In GOB we have known for some time that the economy and environmental conservation can go hand in hand. However, to enable this, it is necessary to know how to conduct matters and stop ignoring environmental legislation but truly believe in not continuing to make the same mistakes that allow a few people to make short term profits.

We ask the political leaders to look towards Europe where, for some time, complex environmental issues have been better handled ensuring that performance goals are met.