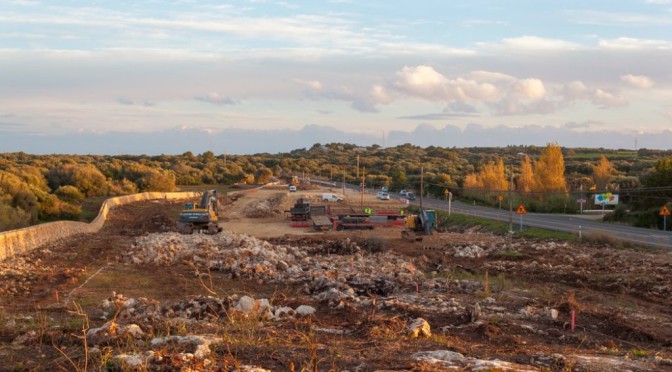 The controversial project for building large roundabouts along the main road between Mahon and Ciutadella has been rejected formally. This was announced on 4th February by the Island Council (Consell Insular) by mutual agreement with the companies concerned and without having to make any compensation payments.

One of the largest and most lively disputes of recent times now seems to have entered a path of administrative renewal. The construction of four double level roundabouts between Mahόn and Alaior raised many voices of indignation against the last government. Personalities of all sorts and political colours warned against the disfiguration that could be caused to an island known especially for its countryside. The mobilisation of society was not useless.

A new local government was elected as a result of the local and regional elections and it expressed its willingness to review the project for an alternative which would cause the least amount of impact. After months of intense negotiations, it has confirmed that an agreement was made with the UTE (Temporary Union of Companies) Dragados and Antonio Gomila, to be endorsed in the plenary session of the 15th of February.

The companies have recognised that the project for which they had tendered was far too large to keep within the available funds, nor would it be possible to complete before the given deadlines. As the current legislation does not allow for substantial modifications, it was decided that the best option was to revoke the contract.

Administratively, this opens the possibility of rethinking what to do about those junctions over which there has been so much controversy – Biniai, Alcaidús, l’Argentina and, to a lesser extent, Alaior. A task which will have to be tackled soon. To this end, GOB has prepared an event for Wednesday 17 February where it will explain and show various possibilities for each junction.

The Consell Insular has announced that some basic safety work will be undertaken along the section between Mahon and Alaior and will consider how to alleviate any delays along the road during the time it takes to make the new designs and then put the works into effect.

Menorca has written a new chapter defending her special character. A great number of people, from a large spectrum of society, has helped during these most difficult times. Many thanks to all and let us continue taking part in debates concerning the sort of island we want both for now and the future.