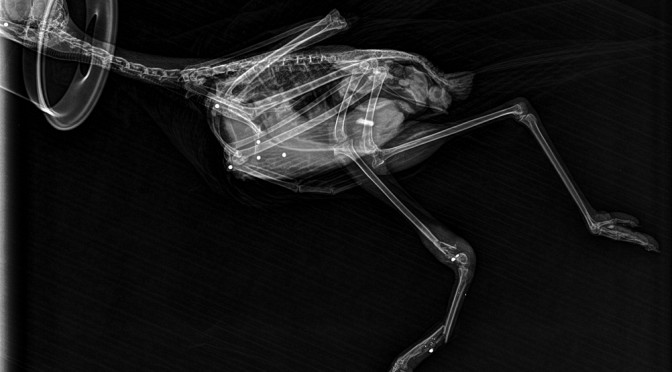 A wounded Sybil bird was recently found shot near Mahon. The X-ray shows numerous pellets which would have caused the wounds.

This is the second protected bird to have been shot in the last few months (a falcon was registered in November). Considering that most of the animals and birds which are shot live in the countryside or are preyed upon by other species, this second case is particularly worrying and it shows that the practice of shooting protected birds is more common than was thought in Menorca.

The Sybil bird is a listed wild bird for special protection. That means it is legally deserving of special protection because of its value for science, ecology, its peculiarity, its rarity and scientific grade of threatened species.

The shape and type of flight of a sybil bird or a falcon are not difficult to confuse with those species which it is permitted to shoot. The people who shot these birds were just being extremely malevolent.

Another issue which is sometimes raised is that of the current Order for the Shooting Season which allows shooting from half an hour after sunrise to half an hour before sunset. It permits the use of fire arms in conditions of low visibility which, as a result, is dangerous for both animals and birds which are not for hunting and shooting as well as for humans. In any case, a sports person should know not to shoot unless certain of doing so safely.

In 1989 a state law tried to overcome the problem of people who shoot without respecting protected species making it obligatory to pass an aptitude examination. However there were some regional communities who claimed that it should be treated as a regional responsibility.

In the Balearics a Hunting Law was produced in 2013 by the last government during Bauza’s mandate. It said that anyone who had been hunting and shooting for more than two years would not need to take any test. Only novices or those who had received a penalty for very serious reasons.

To shoot a sybilBird shot bird is an infraction defined as grave and for which there are fines from between 3,000 to 200,000 euros. And, whoever has done this shooting will not have been obliged to pass an aptitude test.

In any case, the bird that was picked up was so badly hurt it had little possibility of being moved. The person who shot it had been very close to it. GOB has given the place where it was found to the Guardia Civil and to the different Environment Agencies so that they can find out who is permited to shoot in that area.

The vets who work for the Centre of Recuperation certified the gravity of the wounds and the impossibility of saving the bird which was put down to save it from more suffering.

The problem is that the people who hunt and shoot have their own syndicate of riflemen (so they shoot at whatever moves) so, clearly, random and unlawful shooting will continue.

Performance cookies are used to understand and analyze the key performance indexes of the website which helps in delivering a better user experience for the visitors.

Analytical cookies are used to understand how visitors interact with the website. These cookies help provide information on metrics the number of visitors, bounce rate, traffic source, etc.

Advertisement cookies are used to provide visitors with relevant ads and marketing campaigns. These cookies track visitors across websites and collect information to provide customized ads.

Other uncategorized cookies are those that are being analyzed and have not been classified into a category as yet.