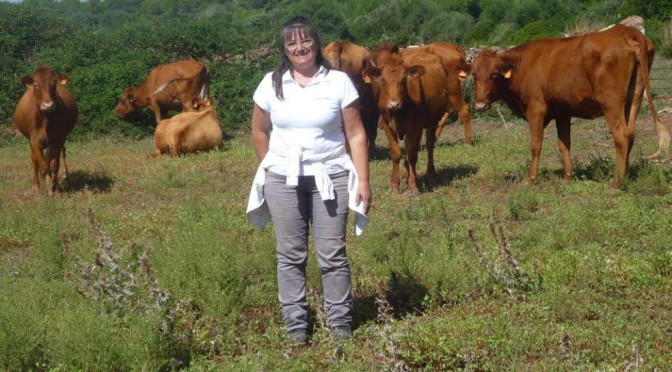 The usual perception of farmers is of strong males working in all weathers with long hours. Maria Tuduri Sintes is the only woman who farms her own farm in Menorca. Of course, there are wives of farmers who help on their farms, but Maria rents 95 hectares which she farms alone using ecologically sustainable methods.

Ecologically produced food is better for our health and for the health of the land. Conventionally produced food seems cheaper but, in fact, other costs have to be added when health problems and non sustainable environmental problems are considered. It is not easy to find training for young farmers keen to farm ecologically and it is difficult for them to find suitable land for cultivating. Menorca has 5396 hectars of ecological farming which is only 7 per cent of its total farm land.

Maria gained her experience first by working as a child on her grandparents’ farm, but later as an adult, after working in a shoe factory, she was employed for eight years on an ecologically based farm. Then she and her husband rented a farm for eight years at Palafanguer. Here they farmed brown cows for meat and pigs for sobrasada based entirely on ecological methods.

Capell de Ferro is the farm Maria has rented for the last four years where she has traditional Menorcan brown cows which give the best meat; she grows oats for animal foods; clover for animal silage; and barley which she grinds for pig feed. She has black pigs for meat and from which she makes sobrassada, and chickens whose eggs and meat she sells in the Sunday market in Mahon.

Maria’s grandparents owned a farm on which, for the last eight years, she has been living with her husband and family at Capifort and which her husband farms. Together, they have a piece of land near Mahόn where they grow green vegetables and fruits some of which Maria makes into jams and preserves. Their outlet both for the vegetables and their farm produce is the weekly Sunday market which takes place throughout the year in Plaça de Colon in Mahon. On Mondays, during the summer from the beginning of June to the end of September, they also sell in Fornells market. Private people who cannot get to the Sunday markets, may make orders by email and baskets are made up and delivered on Wednesdays.

The farm subscribes to the Land Stewardship Scheme (Custodia Agraria) a European initiative that aims to involve all stakeholders in improved economic sustainability of ecological farming not only for immediate effect but for future generations. It promotes agricultural diversity by implementing sustainable measures using taditional plant varieties and breeds, encouraging biodiversity and giving advice on careful irrigation thus improving the land. It promotes selling direct to the customer for improved economic viability. This scheme was introduced by GOB to Minorca in 2002 and Maria is very happy to be in the programme. It has helped her a great deal, she says with warmth, with support in setting up her farm, giving advice and explaining all the regulations as they change.

There is a huge amount of paper work for ecological farmers, much more than for conventionally farmed produce. Paperwork has to be sent to Palma to CBPAE (Consell de la Producció Agrària Ecològica de Balears) for certification. APAEM (Associació de Productors de Agricultura Ecològica de Menorca) is an association for all ecological farmers in Menorca. It notifies its members of new rules and regulations and organises annual fairs in Ciutadella.

Javier Ares, during the time of the last government, tried to reinvigorate CARB (Contrato Agrario de la Reserva de la Biosfera) and now he continues the work as he is the Councillor for the Environment and Biosphere Reserve with this Council. CARB gives an annual grant of 120 euros per Menorcan brown cow. Otherwise Maria receives little financial help. Indeed, she has came across discrimination from the last government which she hopes will not happen with the current one. Application for grants to help keep farms in good condition, for maintenance of stone walls and farm buildings, was denied on the grounds that she could not prove she was making her living from the farm. This was shortsighted since not only should governments be proud to promote women farmers, but also the grants are to help maintain the landscape of Menorca. Maria feels that these decisions are political and had she been a man a suitable arrangement would have been made. Hers is hardly a hobby farm.

Maria does not see water as a problem on her farm. She has cisterns which are filled by rainwater sufficient for most of her needs. What she calls the bottom fields, where her cows graze, has mains water which costs 89 euros per annum for her eighteen cows, one bull, four female calves, and five young males (which at 9 months old are ready to kill for meat) as well as a donkey. The Consell allows her to bury dead animals, though this seldom happens, and they tell her exactly where she may do this.

Farms in Menorca are looking for diversification such as in tourism. Some are near the Camí de Cavalls and can offer places to stay with an educational theme. Maria’s farm is not near the Camí de Cavalls but she hopes to have organised tourist visits once a week next year, for seeing the unusual geologically interesting rocks and beautiful scenery as well as the farm animals and her work there. Though she cannot have large numbers it would give her the opportunity to sell products direct from the farm and explain the importance of ecologically produced food. She has an English company already interested in organising such tours.

This prize is given annually by GOB in recognition of outstanding work done for the environment. It is interesting that this year’s prize is to a woman, Elisa de Olives Lluch, the owner of the farm Es Tudons near Ciutadella. Her interest is in her vision of the future by preserving land so that generations to come will be able to enjoy a well conserved environment. In addition, GOB considers that Es Tudons with its sustainable farming practices demonstrates that it is possible to manage farming successfully by respecting the environment and is an inspirational example to be followed. Elisa de Olives accepted the nomination which she wanted to dedicate to her late husband, Johannes Büttikofer. She also gave her thanks for the excellent management of Bep Llufriu the farmer who, for sometime, has implemented the ecological agricultural methods for which the prize has been awarded.

Remember to visit the GOB shop in the market in the Mahόn Cloistre del Carme for some Christmas shopping. Books, toys for children, ecologically produced food and wine…

The future of “GOB Matters”

This is the last of the “GOB Matters” articles to be written for Roqueta Magazine though future publications will list events and important points of interest. However, greater detail will be found on this English version of the GOB website.

Grateful thanks to Maria Tuduri Sintes for her time and generosity.