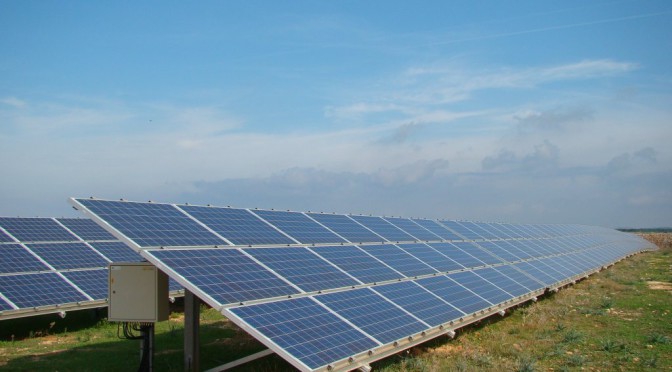 Menorca is regarded in many places as an example of regional and countryside conservation. However, it is not an example as far as energy is concerned because it has a near total dependence on fossil fuels.

To be able to advance the production of energy from renewable sources is one of the challenges which ought to be tackled by Menorca without further delay. It has to be done by finding a way that does not affect the natural values of the island and its countryside. We in GOB believe that it is possible to agree criteria that make the different demands compatible.

The important discussions which have been going on for some years concerning the project to place an ecological park in Son Bruc and Ses Comunes in a mature holme oak forest to the north of Ferreries, is not the same as for the solar parks of Son Salomό and Binisafuller. These constructions are of a size and type sympathetic with the rural environment.

Now, a new discussion has opened to the north of Ciutadella, because of a proposed extension of 13 times its size to the solar park of Son Salomό and because of the two wind farms being processes one in Son Angladó and the other in Era Vella. More than the subjective opinion which one can have (some like the solar panels, others not; some consider windmills old fashioned and others see them as an example of sustainability), it seems undeniable that society should seriously consider the energy problem and look for the most rational approach.

GOB has published its initial proposal for a list of criteria with the objective of allowing the public time to reflect and give their opinion. It makes a proposal, open to improvement, which is intended to regulate any significant building of solar photovoltaic and wind energy installations in rustic land.

This is because only with large energy parks can we change the ridiculously low percentages we have today of renewable energy (solar and wind is 3% of the elctricity we consume, and only 1% of the total energy when transport and airconditioning are considered). For these reasons and even though powerful interests have the power to place panels or small windmills on residential and industrial roofs, it must be assumed that larger installations have to be made in the countryside. To make a comparison, a normal site takes little more than 20 panels, while that of Son Salomό now has some 20,000.

GOB proposes not to permit photovoltaic panels in areas of high natural beauty (wetlands, dunes, holme oak woods, coastal areas of wild olive tree woods and sea buckthorn, gulleys, small islands and cliffs) and to install them with a maximum size of 150,000 square metres. They carry, also, countryside criteria, for both technical and construction plans, so that panels cannot be seen from primary and secondary roads ensuring that the landscape will undergo minimal change.

Wind parks have the greatest restrictions, as much because of the countryside as for the consideration of highly protected birds that should also have their space.

GOB is currently sending its proposed criteria to public institutions, agents for involved associations and related companies. To advance renewable energy is obligatory as much for environemental reasons as for economic ones especially to finally reduce the large energy bill paid each year for buying fossil fuels.

Other countries are also commited to local controls for producing clean energy so as to achieve maximum environmental and economic benefits. The debate is open.

Here you can find the proposal of criteria.