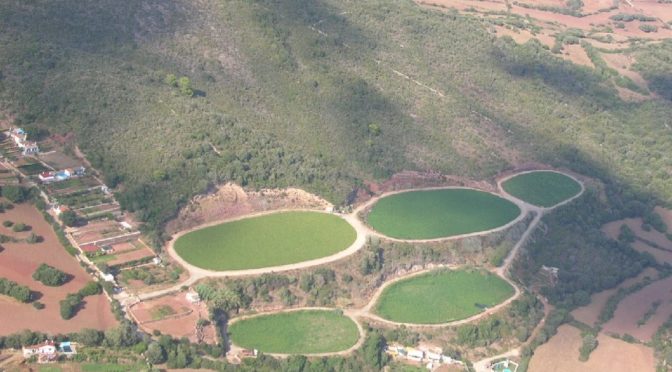 The building of a new sewage plant in Ferreries, to replace the anaerobic lagoon that has worked until now, has exposed a problem which has been building up for many years. Sludge from the old installation was full of heavy metal making a dangerously toxic residue. The current situation has had a long and non-restrictive history.

The sewerage of Ferreries has always emptied into the Trebalúger stream that ends up at the idyllic beach of the same name which has been preserved from urbanization threats thanks to public demonstrations and the courts.

For these reasons, GOB worked for many years trying to stop the stream from being contaminated. In one case, companies were taken to court because Seprona (Police) was informed by the formal complaints made by the association. This did not result in any sanctions being applied because it was alleged that waste in the stream was accidental and from an isolated incident.

It was not until 2011 that incontrovertible evidence could be made showing high industrial contamination. A study drawn up by UIB and IMEDEA, made on mussels cultivated in the ports of Mahon, Cuitadella and Fornells was also made on the beach of Trebalúger. This virgin beach gave results showing very high levels of certain contaminants.

Trebalúger exceeded the three Ports in contaminants such as arsenic, mercury and zinc. It also gave very high concentrations of cadmium, copper and selenium.

With this study in hand, GOB went to the district council (of Ferreries) which is responsible for the sewage plant and asked for analyses of the sewage from the industrial park. In effect, it was possible to check on the level of contamination in waters emptied into the network which was found to be very high. The sewage plant could not cope with all these elements and a large quantity of supposedly purified effluent flowed into the gully.

This forced the council to advise companies of an obligation to purify liquids before emptying them into the sewage so that subsequent analyses would not show any contamination.

Now, the result of this manner of control over previous years is very difficult to manage. Neither the technicians who supposedly were controlling the municipal sewage, nor any council in charge – and they were of different political colours – wanted to stop the industrial contamination about which they undeniably knew.

As a result, the accumulated mud in the chambers of the old sewage plant are full of highly toxic and dangerous waste. We do not know what can be done to manage them and lower their potency. Whether or not they should be exported to some authorized place on the mainland, or should they be confined by entombing them in cement. There are 8,700 metric tons. It will cost a mountain of money.

We can imagine, also, how the mud has accumulated in the stream of the gulley. Since for some years heavy metals have been found in the water of the sea, the 8 kilometres of the stream flowing into it must have a composition similar to the mud of the sewage plant.

This is the result of ignoring the environmental effects and not daring to ask industry to meet its obligations. The economic saving which some companies made by emptying their contaminants directly into the sewage system will never compensate for the damage caused.