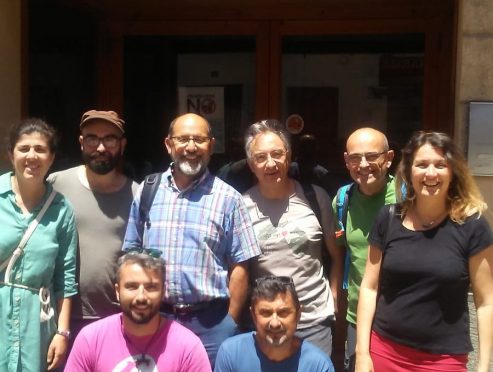 The different island sections of GOB came together over the days of 15 and 16 June, in Mallorca, for the meeting of the Inter Island Board of Directors. This reunion happens annually, rotating between the various Balearic Islands. On this occasion a résumé of their activities and the interisland accounts were given for 2017, audited externally. In addition the budget for 2018 was approved.

During the day strategies were put forward by each of the islands for some of the commonly held key environmental issues which the ecology society tackles together: the governing of the marine environment; plastics in the sea; energy transition; tourist overcrowding.

With reference to the huge rise in tourist numbers suffered by the islands, at a cost to the land, over exploitation of resources and social instability, far from improving, is worsening season after season. The prospect is of tourism continuing to grow alarmingly due to a lack of real political will to commit to any way of reducing it.

GOB is sorry that the law concerning posidonia, though the last meeting in Ibiza a year ago revealed its urgency, has not yet been approved and, up to now, there has been a lack of necessary personnel to control any irregularities especially within the boundaries of the protected natural spaces and the marine reserve.

Given the preoccupation of the Balearic public concerning the boating season having begun without an approved law on posidonia protection, GOB demands that it be sanctioned with the maximum speed.