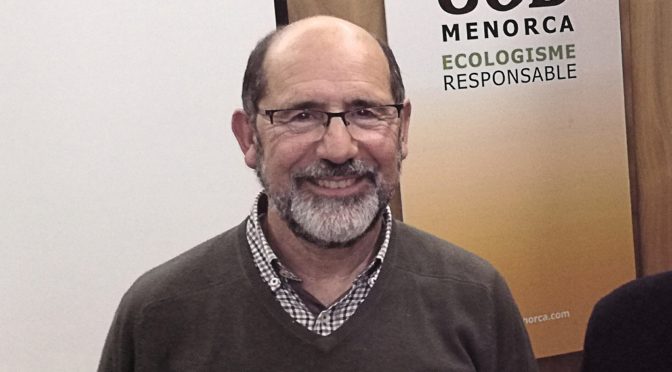 Brakes should be applied to the increase in tourism

The new leader of the ecology association wants to give more publicity to its activities and to get other groups on the island involved.

From the bank to volunteering and from volunteering to the presidency of the well-established ecological association of Menorca. Carlos Coll Pons (1950, San Luis) has accepted the proposal of the assembly of GOB to succeed Jaume Obrador as its president. Although his past work does not have much in common with this new commitment, he is a cheerful chap from Sant Lluís and open to following the line of his predecessor and especially in promoting and publicising the number of activities carried out by the association. With dialogue and respect he deems it necessary to control the number of tourists visiting in peak season and to highlight those policies which preserve the island’s landscape.

Why have you accepted the presidency of GOB?

I have spent many years helping with the coordination of GOB volunteers and I am the mentor for volunteers from the Erasmus + scheme. My wife and I believed we had contributed our fair share to local society, Deborah as Honorary Consul of Great Britain and Northern Ireland, and me as President of the Mahón branch of the Red Cross, but I decided to accept the Presidency of GOB as I know I can help take this association forward. After forty years of its existence, a large majority of island residents now see what the association has done to combine progress, protection of the environment and sustainability and this is an exciting project for me to play a part in.

What is the area in which you aim to influence?

GOB has many very clearly defined projects but I would like to see greater publicity of exactly what we do. There is a large number of people who know us only as being very strident and demanding but we have more than one hundred activities per year that people do not know about and to whom we need to pass on information as well as making other groups of people aware. I hope I am going to be able to reach contacts that will enable me to succeed here.

Do you think that everyone understands that GOB is outside political ideology?

Yes. It has never been under political influence. We have been equally demanding with all the governments although we all have our own ideas.

As you are also a member of the Economics Circle (Circle de Economía) does it not seem a little paradoxical to end up being the President of GOB?

I don’t think so. The Circle de Economía represents island society and GOB is an important part of that. The greater the variety of members provides a better base for debating ideas.

Are 1.342 members and over 400 volunteers sufficient for the activities carried out?

We will never really have enough but we are happy with the support we have from the public as well as the members. We need more support, however, because we have some excellent projects which are in cold storage because of a shortage of personnel and resources.

We will manage. To a large extent, thanks to the nine multi tasking professionals, also thanks to a team supporting them. Many of the projects are executed by volunteers and they deserve huge credit.

This year it has been necessary to confront the legal costs for the appeal against the project of the main road by the last local government. Will you have to make further claims in the future?

No. We made the appeal because we saw it as a way to stop this project, but we were condemned to pay costs which were 9,000 Euros and happily not the 56.000 which the Executive Council was claiming from us. We only needed four days to raise this amount through crowd funding. This is an excellent example of the support we have. We accept this outcome as, indirectly, it follows our objectives and in general we are happy with how the project has been redirected.

Why do you deem making our E-W main road a dual carriage way not necessary?

It is completely unnecessary. The roads of Menorca are the safest in the Balearics. People must be encouraged to drive more cautiously. It is unnecessary because we are talking about a very short peak tourist season in summer when there is a high pressure of traffic. A vastly widened road cutting down the centre of the island disfigures the attraction of Menorca.

What do you think of the Plan Territorial (planning permission) policy on converting farm houses and buildings into Agrotourism and country hotels?

The PTI of 2003 was essential for Menorca to avoid the same development mistakes being made as other islands. Now we want to be actively involved in revising it. Some rural tourism projects have been controversial because they were hiding urban speculation. We believe that rural tourism projects should be permitted to develop farm buildings already there, but with the main object of promoting agricultural activity, so increasing the farmer’s income, and not the building of new hotels on agricultural land.

Energy is a priority?

Yes, it is where the most work has to be done on this island as well as addressing the problem of water. GOB has been studying renewable solar parks which would have little impact on the countryside but the Central Government keeps putting the brakes on this sector yet it is necessary for environmental reasons and for generating work. The other challenge is the central electricity power station in the Port of Mahón which produces 60% of CO2 emissions. We are not able to do without this plant at the moment but we have to work towards lowering contamination. The substitution of gas oil in the turbines to gas transported here in boats would be an intelligent solution.

The Marine Reserve of the north…

Having detected a severe deterioration of the Marine Reserve on the north of the island due to poaching, we started a campaign with Menorquins pel Territori to bring awareness of how this reserve was in danger and to get the local governments to wake up to the problems. It is essential that in other areas protection needs to be given too, pressure needs to be decreased which will enable marine life to thrive as it has done in the north. The Marine Reserve of the north and the Natural Park around the Isla del Aire need special consideration. We need to work together with other organisations to ensure these areas are restocked. Working together results in important progress such as the corridor of cetaceans to the north of the Islands being achieved, which, furthermore, stops the threat of the petroleum prospections.

The tourist high season is oversaturated and brakes should be put on to curtail the number of tourists in the two peak summer months in order to maintain sustainability. Many public groups agree that shoulder and low season promotion should be stepped up and should include cultural and social aspects of the island. It is no longer necessary to promote “sun and beach” holidays as these sell on their own. A more recent problem is unauthorised renting through online platforms. These properties are often not registered, avoid taxation, increase the peak season tourist numbers considerably and now need to be controlled for the good of the Menorcan community.

What do you propose?

We need to generate non tourist related opportunities which will be sustainable and sensitive to the Biosphere Reserve, to a circular economy and land stewardship. All job producing opportunities. We think it will be valuable to debate with Menorcan university students to talk through how future job opportunities could be created for them on the island.