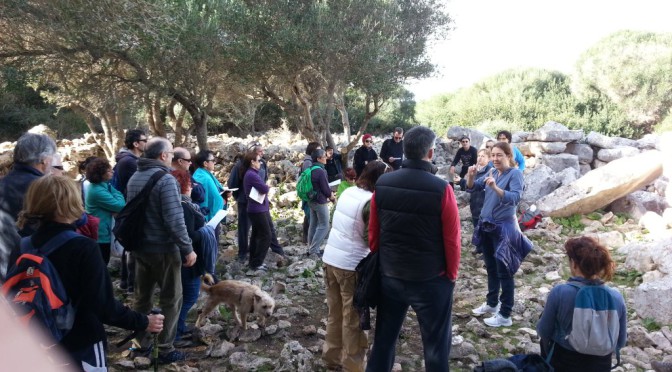 Last Sunday was a perfect day for an excursion organised as part of the Sant Antoni festival by the Department of Culture of the Island Council in conjunction with GOB. It was from Cala en Porter to Ses Roques Llises and na Comerma de sa Garita and was to appreciate both Menorcan nature its ancient history.About 250 people of all ages and conditions met in Cala en Porter behind the beach just as the Cami de Cavalls enters the ravine. After a little while, as the walk commenced, an enormous and uncharacteristic mata lentisco was seen, which time has allowed to grow from its usual bush to a tree with a large trunk. This particular one has been listed in the Catalogue of Special Trees of the Balearics.

A little further where the path became rather steep the walkers battled against the fresh wind from the south. They were also able to see some of the problems of erosion which rain without management causes on parts of the Cami de Cavalls. From the top there were beautiful views of the ravine filled with fruit trees. At the bottom, there were two “pacaners” also listed as “special” trees  like American walnut or pecan nut trees.

Following the path from the west, it then climbed gently until the fences of the flat land separating the ravine from Llucalari. Here there are many vestiges of ancient Menorcan settlements which was the main purpose of this excursion.

It was necessary to make small groups to take maximum advantage to be able to hear the archaeologists give their interesting explanations and clues to what the remains meant. Difficulties in organising so many people were overcome by the good humour of all.

Ses Roques Llises is evidence of some of the first settlers who came to the island. It has existed some 4,000 years and was a tomb, originally covered with stones and earth, which functioned as an ossuary for the dead. By contrast, the remains of na Comerma de sa Garita, seems to have had a ceremonial use and which was not domestic. It dates from a later period showing influences on the island that confirm differing evolutions in the rest of the country.

After the visit to these sites, the walk went on towards Torre d’en Galmés, where a bus service, which worked with great efficiency in transporting such a large group of people, returned everyone back to Cala en Porter at the planned time.

Further excursions will be anounced.