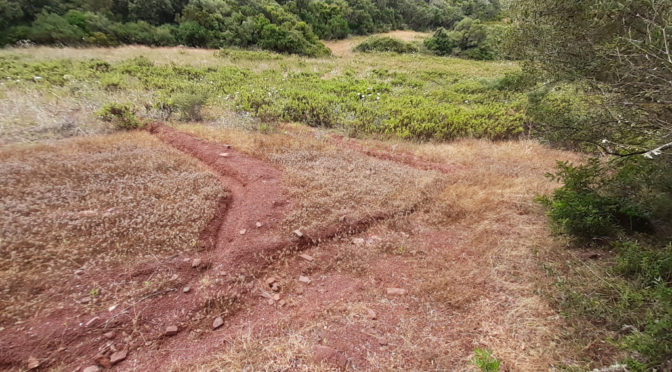 One of the objectives of the Land Stewardship Scheme is to contribute to preserving the fertility of the land. This is basic not only for the life of the soil, but also for the productivity and economic viability of agricultural exploitation. Despite this central importance, land health is frequently forgotten.

The techniques for regenerating agriculture are based on putting the health of the soil at the centre of farm management. The Land Stewardship Scheme has promoted a series of pilot tests in three member farms to study the suitability of some of these techniques for the Mediterranean climate and in the context of Menorcan countryside. This article explains what they are.

The regeneration of grazing land consists in planning and moving the cattle according to the needs of the soil. This method is inspired by the effect of large herds of animals that make an intense but short lived disturbance to the soil before wandering on again. In this way, the animals make the most of the pasture without exhausting it and giving it the possibility to grow back. Additionally, the excrement of the animals makes manure for the soil, nourishing and increasing its fertility while the animal hooves crush and press the excrement into the ground.

In order to achieve this effect with domestic cattle it is important to keep the herds on small plots, where they stay for a predetermined time. This can be done by using temporary gate locks so that the cattle can be moved according to a schedule for obtaining the best results. For optimal effect, over grazing must be avoided to make the most of the food produced by the land. Therefore, there must be careful planning bearing in mind the number of animals, the state of the soil and the quantity and quality of the available food. Basic requirements are to leave a period for the pasture to recuperate between the livestock visits and to learn to recognise the state of the land in order to adjust the time the animals spend on it.

Using animal folds is a similar method to the one above insofar as it is based on the planned stay of the animals, but in this case, it is used for them to stay at night and is especially applied to areas where the land has lost a lot of its fertility allowing it to recover its productivity.

This method used to be used in many places to revive exhausted land. If the land is used sparingly, its microbiology recovers.

Keyline design is a methodology used for farms to optimise and improve on natural resources focussing on the absorption of rain water into the soil and avoiding erosion, evaporation and its run off. Well applied, it improves the fertility of the ground, its structure and water retention capacity. If rainwater is not managed, it finishes by making ever larger furrows that run from the ridges of the land to the valleys causing major erosion along the way. The treatment consists in creating new simple conduits on the ground so that the water is better distributed and does not run away quickly. It ensures that the water infiltrates the soil more homogeneously in order to increase the humidity and fertility of the whole area.

This methodology is of special interest for dryland farms (predominant on the island) and areas in dry climates such as in the Mediterranean, as it increases the water stored in the soil. It could be, furthermore, of general interest in Menorca for significantly increasing the refilling of the aquifers.

These techniques have now been applied for more than a year to some of the farms that are part of the Land Stewardship Scheme. We continue to enlarge on the experience in order to take the methods for regenerating the soil to a maximum number of places on the island.

This project has been cofinanced by the FEDER Operational Programme for the Balearic Islands, with the Mava Foundation and the Menorca governing Island Council.