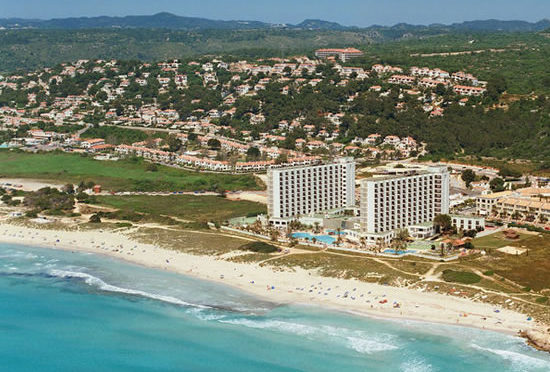 The local Island Government (Consell Insular) has in its hands the power to take back the decision on the two hotels of Son Bou or let them carry on for a further 50 years or more. In GOB’s opinion there are tools available for not accepting the proposal of the company to maintain the current sizes.

The two hotels at Son Bou are identified by many people with the clearest image of the excessive urbanisation which came about in the 1970s. On the front line of the coast, two enormous bulky buildings were built each twelve stories high, completely transforming the view of the largest beach in Menorca.

Many people were resigned to hoping that the right moment would come when the two constructions would become obsolete and could be taken back. Then, lo and behold, the Tourism law of 2012 incorporated an additional provision which would allow for projects presented for modernization to be excluded from the parameters for land use that currently existed for urbanisation or building for tourism.

The company has taken advantage of this situation and has presented a project which, basically, maintains the height of the two towers, staggering them a bit along the part that faces the sea, and adding bulky constructions along the plots of land at the sides of the hotels. As the height of the buildings is not to be reduced, the impact on the landscape will not be improved and, furthermore, because of the extensions the building will grow in size.

In GOB´s opinion, the project as presented is completely contrary to the general interests of the island however much it may be a profitable enterprise for the company. It does not seem acceptable that in 2017 the impact of this style can be reinforced to endure for many more decades breaking as it does with the harmony of the landscape with such a disfiguring prospect.

For these reasons, the GOB association believes that the project ought to be subject to assessment in all its proceedings. That is, its effect on the landscape, water consumption, refuse production, sewage, energy consumption, the effect on the surrounding traffic mobility, the contribution to overcrowding at the height of the summer, etc. And it ought to be assessed on the criteria of 2017, which are not the same as those used in 1973 when the constructions were built.

Forty four years have passed and neither the economic situation, nor the environment, nor society are the same. GOB believes that there is sufficient jurisprudence to endorse that it is wrong to authorize a project such as has been presented and be able to use all the tools and means available to prevent the renewal of authorization for the proposals for the two large hotels of Son Bou.